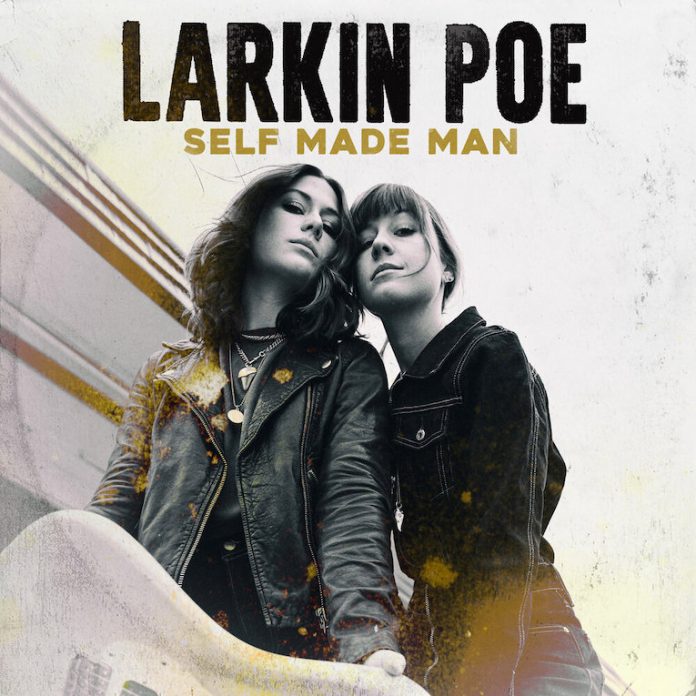 It comes in many forms of course, and a lot of Larkin Poe’s new album can be seen through the prism of it. There’s the feel in the music that the Lovell sisters make that can broadly be put under that word.

Not least the sound itself. There is an effortless way of the riff’s just sounding huge. Then there’s Rebecca Lovell’s voice. She seems to roar. That’s all powerful, of course, but it goes deeper. The lyrics on this, their fifth album, seem more concerned with imbalance than before.

“She’s A Self Made Man” – the near title track that starts the album details their struggle: “For an underdog, I’ve been riding high”, sneers Lovell, and the inference is clear here. Don’t mess with them. They are on a mission.

And the Lovell’s – along with bandmates Tarka Layman and Kevin McGowan – have emerged from Nashville here with a plan to take on the world.

“Holy Ghost Fire” was a good choice for a single too. Something primal lurks below the surface, but it’s primed and ready to be a radio hit. And it sounds ready for live performances too. There’s a ready-made call and response thing going on. Clearly Covid-19 has left everything up in the air at the moment, but if/when they can get on the stage, this will be there with them, you can bank on it.

The same is true of the crunchy “Keep Diggin’”. I don’t know whether there’s been a focus on the hooks this time, but it seems like there has been, because across this short, sharp collection (the 11 songs here clock in at just 35 minutes) there are so many memorable moments.

One of them, for sure is “Back Down South” on which Tyler Bryant joins them to play some scorching slide with Megan Lovell. He is the perfect collaborator for LP’s LP, if you will, because broadly speaking the vibe of both is the same. Rooted in the southern rock, but eager to strike out on its own.

“Tears Of Blue And Gold” has a glam rock stomp about it – handclaps always do that for a song – but the story it weaves, really is worthy of their distant relative. There is something of Fleetwood Mac about the way it builds too, a real gem amongst many.

“Power”, that word again, seems present in the energy of “God Moves On The Water”, an almost traditional gospel tinged folk revival. But which here seems to pulse with an electricity, and although “Every Bird That Flies”, changes the feel to something darker and a little brooding, then there is a real rough and ready feel to it.

There is a real insistence about the grooves here. Like they won’t be denied. “Scorpion” wouldn’t be out of place on a Black Rebel Motorcycle Club record, and the bluegrass side of what they do is present on “Danger Angel”, but like everything else they do, Larkin Poe do this entirely on their own terms. The sound is rooted in the past, but they are shaping it’s future.

“Ex Con” is the most outright country, to give it an easy hang, but it’s the country storytelling of Jason Isbell and the likes, rather than the schmaltzy George Jones type, that’s not to say that it isn’t uplifting, though.

A collection that has frequently seen the silver lining at the end of the struggle ends in that way too. “Easy Street”, on which the Lovell’s sing “I am gonna keep on keeping on” as if to remind themselves, allows a celebratory tone. A pride, a strut, maybe, at what they’ve overcome to beat the “Self Made Man”.

Thing is, there’s still a power in this union. And there’s a fire inside Larkin Poe that isn’t close to being out yet. You can feel it.