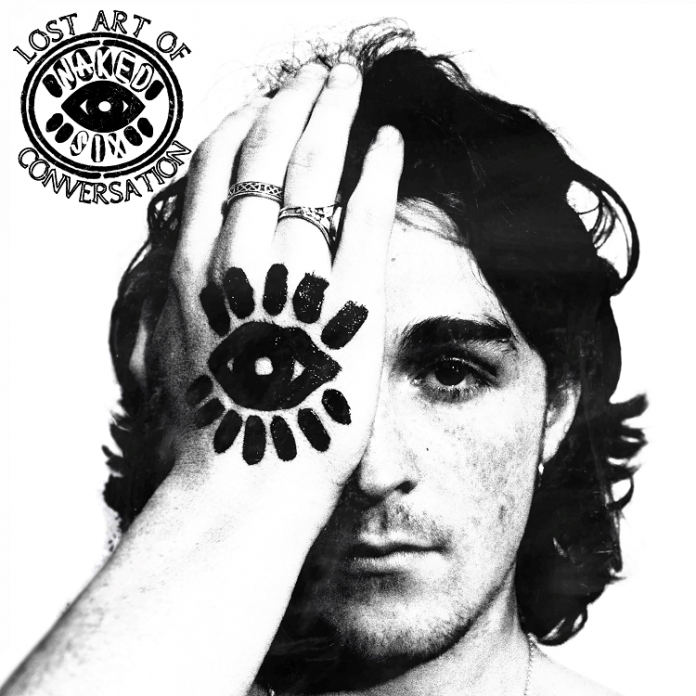 I am writing this in day two of the post football age.

I know there are way more important things about the current world these days than the fact I couldn’t go to watch my team yesterday, but go with it, for now.

I am in a WhatsApp group with some lads I watch cricket with in the summer, and we all sent pictures into the group yesterday of what we were doing at 3pm on the first Saturday with no league football.

I was at a match somewhere else, one was watching tele in his house, one was in the boozer, and it’s the picture of his table that struck a chord with me in the context of this record.

I knew some of the six or so around the table, but whether I know them or not, there was one thing that bound them:

Each and every one was looking at his or her phone.

I am aware of the irony that I saw this in a WhatsApp group, but if anything summed up our culture better in 2020 then I haven’t seen it. Together, but alone.

The “Lost Art Of Conversation” indeed.

Naked Six clearly have an opinion on this. The title track of their debut record starts thus: “Look around its just people on their phone”. And before its got to the chorus, Seb Byford has wondered about the effect on mental health of this “interaction” (“social media has got you paranoid again….”) and he’s concluded that “this is the dawn of a new age, whether it’s good or bad I can’t work it out….”

All of this might seem a bit weighty for what is a rock n roll album, but that would be to miss the point. Naked Six have plenty to say. And they are going to say it right here and now.

It is interesting to chart their evolution to this point too. I first saw them at the end of 2017 and then again the spring of 2018, before reviewing their EP in the autumn of that year. And whilst it would be wrong to say it was like a different band these days – words like “raw” and “primal” that I have used in everything I have ever said about them still apply here – it is also fair to say that it isn’t the same band, either.

That is true literally, given that Callum Witts – cousin of drummer Tom – has joined on bass and keyboards, but also figuratively, as the sound has really broadened here.

The opener “21st Century Brawl” is more performance art than anything else, with Byford almost in the fire and brimstone preacher role (“a generation of politicians,” he shouts, “ruled by racial hate and superstition”) and make no mistake, he never leaves the pulpit.

What is interesting as well is that this one uses sax to great effect – a few others do elsewhere (not sure whether its real or sampled, whatever, it works. Everything here does, in honesty.

“Song Of The City” has a real garage rock thing going on. The Godfathers, maybe, The Sonics, they are all in here, and its striking just how “punk” the album is. Producer Thomas Mitchener has worked with Frank Carter and The Rattlesnakes and Gallows. It shows.

Naked Six are a band in a hurry. Urgency permeates all they do. “Sticky Gum” has a real unhinged quality, “Gimme Something” has angular, almost Therapy? like sharp guitar lines, but there is – to these ears anyway – something of Jesus And Mary Chain in the verses.

“Piece By The Pistol” has the same type of massive guitar line as the likes of Dinosaur Pile-up or Puppy, but the melody in the hook is really special. This is one of the best things this has to offer.

When I first saw them I thought of bands like The Vines (before realising that The Vines only had one decent song and it did NS a disservice) and Zico Chain and that is still true, but it might be a more accurate description to say that “Split” would have fitted in just fine on a Virginmarys album – praise doesn’t get much higher.

The drums of “Poison Apple” thump, but special mention here for the lyrics. They are a world away from the tedious boring crap. This is a clever, erudite record, but never more so than right here.

A short collection too. It doesn’t arse about with excess fat. Instead, everything, as on “Grapevine Telegraph” is stripped down to the bone, even the 60s tinged “The Change”, which wafts around with psychedelic intent, gets in and out in three minutes. What it does do, though, is signal a change of gear. As the last one, “Outside Looking In” is a proper ballad.

The gentler end serves only to prove that Naked Six are a band that can be anything they want. Look at the way they’ve evolved in two and a half short years to get to “Lost Art Of Conversation”, they really are band worth talking about. So get off your phone and do it. Or text your mates, whatever.