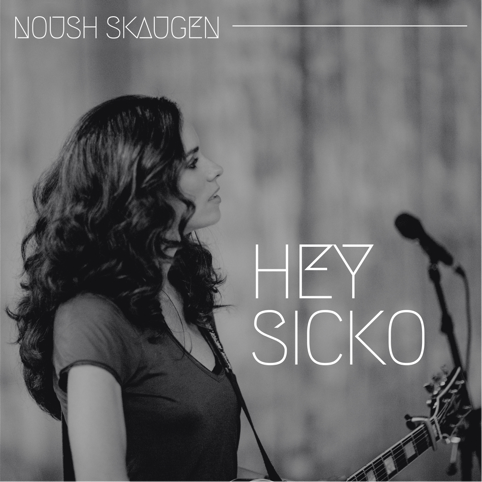 A quick confession; I’m quite fussy about female rock voices. The ones I like tend to be in lower registers and have quirky tonal qualities. Voices like Chrissie Hynde, Alanis Morissette and Debbie Harry. Noush Skaugen sits well in that company.

This is Skaugen’s second album and, for a myriad of reasons, it has taken her nearly ten years to make. It’s been a proper labour of love, released without a label’s backing, but don’t be fooled into thinking that means it’s a bit basic and homemade sounding. It’s not. The production was overseen by Michael Beinhorn who’s helmed the desk for Aerosmith, Soundgarden and Red Hot Chili Peppers, amongst others. It’s a beautifully recorded and engineered piece of work. In fact, it wasn’t just Skaugen’s voice that grabbed me by the ears when I heard the single ‘Run Baby Run’ a couple of months ago. It was also the immense bass tone. Seriously, this is one of the best I’ve ever heard and, as a bass player myself, I’d have been stoked to listen back to my parts with this monstrous rumble clanking out of the speakers. It’s production touches like this that help make the tonal quality of the album stand out from the competition.

The album opens with ‘Automatic’. It’s a punchy, classic slice of Americana. Think Tom Petty on guitar with Stevie Nicks singing. In fact, Skaugen’s voice often recalls the Fleetwood Mac legend but is a touch raspier and lacks the exaggerated vibrato, thus avoiding any accusations of parody or straight imitation.

For the next three songs, including the title track, the tempo drops a little with slower, acoustic driven tunes, swirling with Hammond organs. What lifts these tunes out of the ordinary are the voice, that bass, and interesting lyrics that studiously avoid cliché.

The pace picks up again courtesy of the rockiest song here, ‘Run Baby Run’. As I already mentioned, the bass in this song is a gnarly, growling beast that, along with the copious use of shakers and a solid drumbeat, drive it along with gusto. It’s also as catchy as you know what. That’s followed by ‘Black On Gold’, which is slightly less rocky but still a catchy up tempo number. Then we get a sort of Rockabilly vibe on ‘If The Devil’, with hints of ‘Love Cats’ by The Cure about it. The tone is changed again with the Chris Isaak infused ‘Everything’s Ok’, which features one of Skaugen’s strongest vocal performances. After that, we’re off on another left turn with the Joan Jett-like rocker ‘Bitter Lace & Leather’. With ‘Tonite’ we get a song that could easily have appeared on Fleetwood Mac’s ‘Tango In The Night’ and we’re back in the Tom Petty ballpark with penultimate track ‘Only The Good Die Young’.

Rounding off the album is, for me, the stand out track, ‘Start When It’s Over’. I am a sucker for this type of epic, sweeping power ballad, infused with orchestration and with a real emotional punch to it. Skaugen’s vocal on this track is sublime, with the song building to a crescendo that reminds me in tone and ambition of ‘Street Spirit’ by Radiohead.

On the face of it, there’s a lot about this album that wouldn’t normally have appealed to me. Singer songwriter stuff and Americana do not feature heavily in my collection. However, if you like albums that offer plenty of light and shade, are familiar and comforting in their choice of influences without overplaying their hand, feature outstanding musicianship, and are topped off with a superb vocal, then ‘Hey Sicko’ will do the trick. The more I’ve listened to it the more I’ve grown to love it.