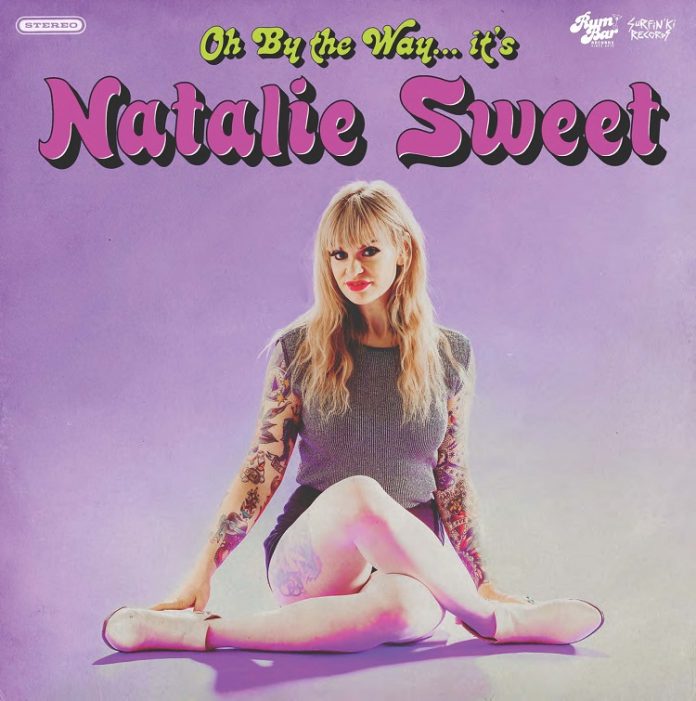 To listen to “Oh, By The Way It’s Natalie Sweet”, is to open the door on the past.

It’ll probably transport everyone to a different place, but for me, I am about six years old. It’s Thursday night. It’s 7pm.

I am not sure how well this will translate to US readers, but over in the UK we used to have a TV show called Top Of The Pops, and it was where you heard the latest. It was something the whole family did. Your dad would tell you “they don’t write them like they used to”, your mum would enjoy some of it, and me? Well I consumed it all.

If I liked it, I’d save my money and buy some of it, which is where I got The Very Best Of Blondie from. I had heard “Hangin’ On The Telephone” and ok, I might not have known it then, but its probably the first power pop song I loved.

Which brings us back to where we came in.

Because Natalie Sweet isn’t trying to do anything but wallow in that same nostalgia. This is the rock n roll of The Shangri-Las, of a time gone by, and it’s wonderful.

“Lip Service” chugs along with a touch of punk rock lip curl, and if you are taken aback by a debut record sounding this classy, then perhaps it is worth thinking that Sweet was the former singer in The Shanghai’s and for this she’s put together an all-star band that includes Morten Henriksen of MV faves The Yum-Yums.

This was never going to fail, but as “Good Love” with its obvious “Shout!” reference, comes along in a Technicolor blur, you get swept along in the slipstream.

The more mid-paced “I Still Want You” – on which Sweet sings “you got the stuff to make me blush” in such a way that suggests she’s never blushed in her life – adds an almost “The River” era Springsteen dynamic, and “Another Bottle Of Wine” merely underlines that if this was any catchier they’d make it wear a mask in public.

These are all, basically, two minute blasts of glorious melody. “I’m Wrong, You’re Gone” is the best – arguably – with its harmonies, but it would be unfair to pick a favourite, so good is the record as a collective.

There’s something so 80s about “Goodbye” you half hope it was recorded with the band on roller skates playing with Yo-Yo’s, but for all the innocence – the air of wholesomeness – scratch away the veneer and its anything but. “Hit And Run” opines girls who love and leave you, while “I Don’t Want  To Need You (Tonight)” is so timeless that, honestly, it could have come out at any point of rock n roll history and not sounded out of place.

And so it carries on. “Eye Candy”, (“I am looking for a little bit of fun”) the outright Ramones flavour of “LA Loser” (“poppin’ cherries, poppin’ pills, I know how you get your thrills”) have got sex and drugs sorted, and “Pizza Man” takes care of the rock n roll.

“Do The Shanghai” is a homage to her former band (it might be one of their songs, I don’t know…) and “Don’t Worry Babe” manages to sound like it hasn’t a worry in the world. Apart from, that is, getting laid.

That, when you get…..urmmm down to it… is “Oh By The Way….It’s Natalie Sweet” urmmm….nailed. Rock n roll so innocent on the outside that it would fight right in at a chaperoned dance, all the while knowing that the real fun was in the car park out the back.