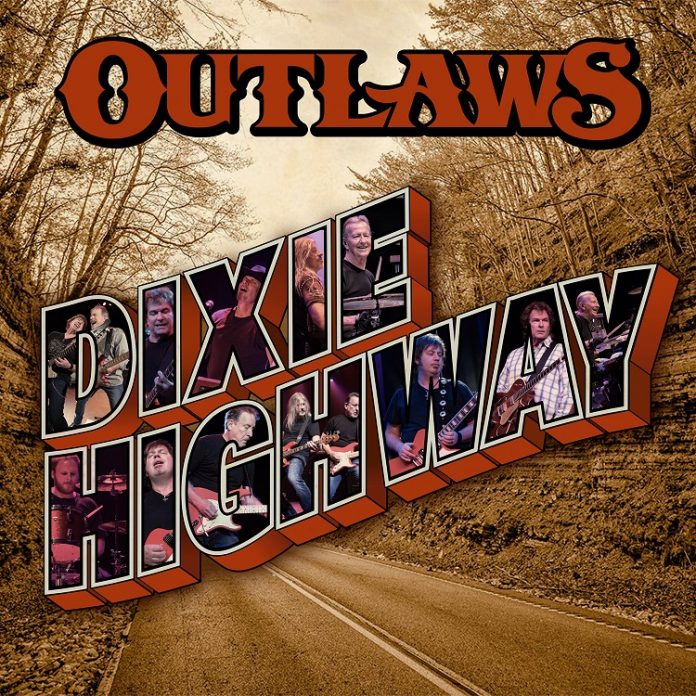 Even if you’d never heard of Outlaws, if you were presented with an album called “Dixie Highway” with song titles like “Southern Rock Will Never Die”, “Rattlesnake Road” and “Endless Ride” on, then the chances are you’d have a damn good go at telling me what it sounded like, right?

Sometimes there’d be a big reveal here, with the phrase “well, you’d be wrong” after. Not here.

Since 1975 Outlaws have done this sort of thing, a couple of members still remain from that first album 45 years back too, drummer Monte Yoho and singer Henry Paul (both of them have left at various points, but are here again now, giving this a real feel of authenticity) and this current line up of the band – honestly, judging by their wiki page, the amount of people that have been in and out of this band is bigger than the cast of Ghandi –now including guitarist Dale Oliver who worked with Paul in Blackhawk have stayed true to the blue collar tales of the heartland roads.

Right from the aforementioned opener “…..Die”, essentially gives all its secrets away. A brilliant song, somewhere between Skynyrd (who get a namecheck in the second verse) and dirt roads country it is a salute to the fallen.

The emotion with it is delivered, makes absolutely plain the love that these boys have for the music and the history, but – and I’d argue this is more crucial – proves what they have to offer to the future too.

Everywhere you look, the guitars evoke The Allman Brothers and Molly Hatchet in equal parts and on pretty much every cut (and make no bones about this, Outlaws are the type of boys that call them “cuts”) there’s a solo where you drift off into a reverie. “Heavenly Skies” is gorgeous as the title suggests, and the harmonies alone are worth finding this record for.

The title track is a little more rough and ready. The Dixie Highway originally connected Chicago to Miami – the first vital thoroughfare between the Midwest and the South. Surely this record is meant to represent that journey, that struggle? And the timeless sounds of “Overnight From Athens” could be from any point in that evolution too.

“Endless Ride” explores the country roads that take them home and the vast scope of its sound matches the desert night you imagine it being set in, “Dark Horse Run” on the other hand, has just a hint of The Eagles about its guitar work – indeed the whole collection is pretty 70s sounding.

“Rattlesnake Road” sounds like it could have been on one of those mid-period Steve Earle records, and kudos too for use of the phrase: “she wasn’t the best and I wasn’t the worst, if true love was water, we’d have died of thirst” and if the whiff of Thin Lizzy, for me anyway, has hung over this throughout then “Lonely Boy From Dixie” brings that brilliant guitar sound right to the forefront.

“Showdown” does it again, over an Instrumental which would have even Warren Hayes looking on in righteous envy, and surely nothing is more important here than “Windy City Blues”, a song written by original bass player Frank O’Keefe and it has bit of soul about it too. Whatever, it stands as a fitting epitaph to him.

That one, just as much as the first one here, is about the spirit of the album. The last one bookends it nicely too. “Macon Memories” recalls The Allman Brothers coming to Macon, Georgia. But it also offers this: “if you were lucky enough to get out, boy there weren’t no going back.”

And that sound has provided an escape – both literally and metaphorically – ever since. It still does, and after more than half a century of making music, this is still Outlaws country. These 11 songs in “Dixie Highway” are a fabulous signpost to that.