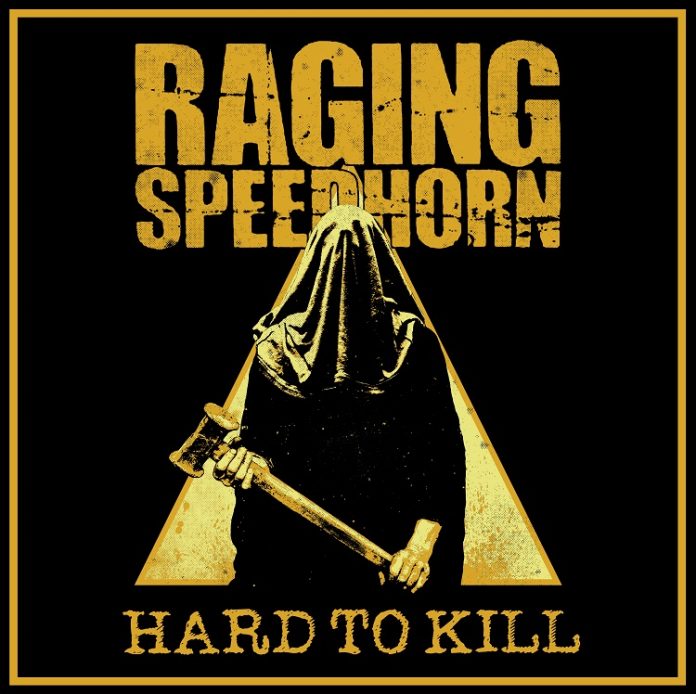 Four years after “Lost Ritual” – Raging Speedhorn’s comeback record – comes “Hard To Kill”. Now, part of me wants to end the review there, because anyone who knows what Frank Regan and the Raging boys do, knows that that sounds like.

However, you’ve also got to say it one more time for the people at the back because Raging Speedhorn deserve to be heard.

This is a new band, really, from the one that was on “…..Ritual”. Dan Cook is on co-vocals, while RSH also welcome new guitarist Dave Leese and former Hundred Reasons bassist Andy Gilmour who join founding drummer Gordon Morison and guitarist Jim Palmer.

“Snakebite” thunders in. There’s gang vocals suggesting “we don’t need a reason to die” before there’s a moshpit that crushes. This is like Cancer Bats if Cancer Bats were full of Hells Angels doing crystal meth.

“Doom Machine” is what Orange Goblin would sound like if they were a punk band. It’s greasy, it’s nasty, its filthy. It’s brilliant.

“Spitfire” builds itself on a ginormous bass from Gilmour, and it’s the type of song that makes you want to go out on the street and start a fight (with a little bloke, obviously, I haven’t taken leave of my senses….) the title track, on the other hand, is perhaps the best. There’s a bit of Every Time I Die here, but like them, RSH have always had the heart of a rock n roll band. There’s choruses, hooks, the type of sloganeering lyrics that The Almighty used to do for a pastime, but its glorious heaviness too.

By now, to be honest, whether you are a hardcore fan or merely discovering the band for the first time, you probably don’t need me to tell you what a song called “Hammer Down” might sound like, but these scamps they have a habit of confounding expectations, so this is the heaviest and the slowest. Not exactly Paradise Lost, but maybe a bit of Crowbar, that type of thing.

There’s some real, proper slabs of meaty metal in these riffs too. “Hand Of God” being a case in point, while “Brutality” comes in with an air of violence, and it’s like being pummelled with a 2×4 really, really fast, and whatever lurks in “The Beast” I am not going down in that particular swamp to investigate.

Whatever has gone before, the closing song is a surprise. “Children Of The Revolution” (yes that one!) is oddly very good, which you maybe didn’t expect. It is, though, the other eight that confirm that Raging Speedhorn are not just back here, but in – whisper it – the form of their lives.

They still are the sound of a rancid Transit van, with Cornish Pasty wrappers, Fish and Chips and Tesco Meal Deals mixing with Razzle Readers’ Wives (and you wouldn’t want them any other way) but this might be their best album.