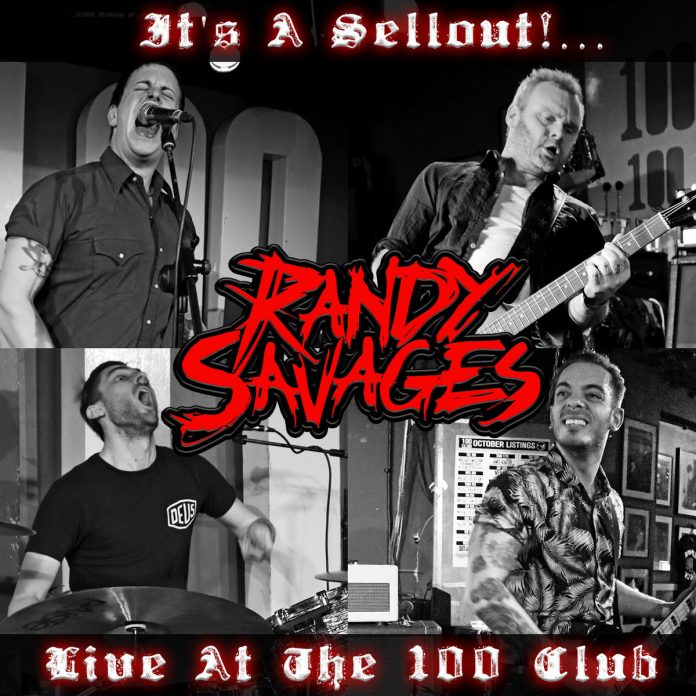 In a world of broken promises – and that might be a comment on the election today……. it’s good to have something you can trust.

So. Randy Savages, from Camden Town, reckon they are: “Screeching out of a North London lock up on a stolen moped, Randy Savages are the missing link between cheap speed and Cheap Trick.”

And, damn them all, the rapscallions, if that isn’t a better line than I’ve got.

I had them on the website back in the summer of 2018, basically because I thought they ruled, and this live set from London’s 100 Club (the name alone gets bonus points because I’ve got a Ginger Acoustic live album recorded there in my collection) confirms that I am not always wrong.

Back on November 24th 2018 they opened for Wonk Unit, and documented it, before handing it to Dave Draper (Ryan Hamilton, and the aforementioned Mr. Wildheart amongst his credits is enough to get love on here) to make it sound ace.

So with a “We are Randy fucking Savages and we are going to blow your face off…….” They proceed to do that for 20 odd minutes.

“Guilty Of Nuthin” is rock n roll, its as simple as that. The joyous glitter cannon of sound that I’ve loved since I was about 10, this is the sound of men who have a Leopard Print on their 3 piece suite (and stains, good lord there’d be stains!)

“Doghoused” almost relishes a row with the missus, and those of us that spent the late 90s in the Changes One record club (and I am willing to bet that someone reading this was) will be dusting off their Yo-yos and B-Movie Heroes EP’s.

This is like Chuck Berry after a three day bender and they don’t even care about the hangover. Power pop with the emphasis on the power is all over “Better At Your Age” (come on, I’m in my mid 40s reviewing punk rock CD’s I am not even sorry…..) and the best, filthiest thing this side of The Damned in “Misanthrope Boogie” – you’d best believe I am down with this, this is the soundtrack to my Christmas (OK, maybe not the bit about the tonne of cocaine).

While you are wondering if you can hate the world and still grin like a lunatic because the EP is so good, along comes “Intercontinental”, which imagines a world where The Hot Rods are in a Biker Gang with The Hip Priests and even the Hell’s Angels are scared.

Simple, effective, glorious, Randy Savages deserve to get some of whatever they want. This is part glitterball and part middle finger to the human race. It is also wholly brilliant.