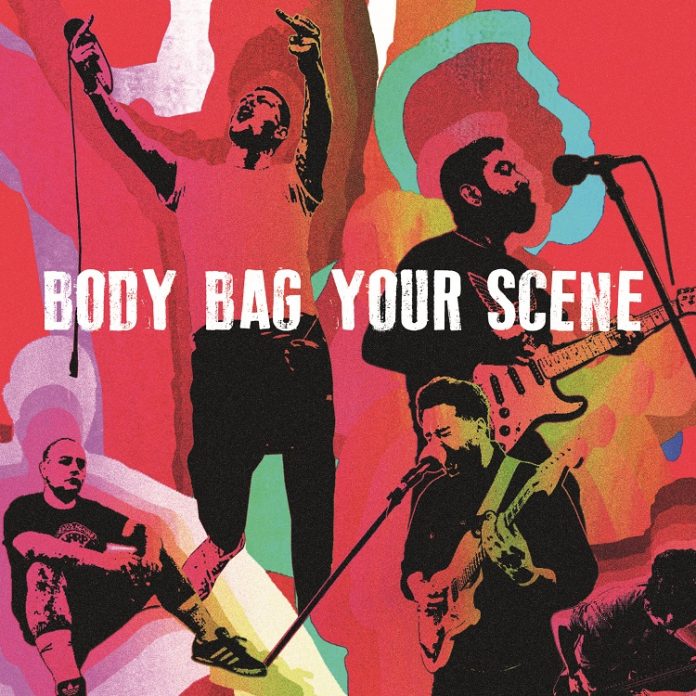 You best take notice of these words:

Because, as much as you swear that it’ll never happen to you, it’s going to.

And that three lines is more than a hook in “Our Time”, the third song on “Body Bag Your Scene”, the third album from Kent’s Riskee and The Ridicule. The thing is, it seems that what they want to cart off in the body bag is, well, the older generation, the record labels, the media. In short. Anyone, really.

Scott Picking (Vocals), Jimbo Aglony (Guitars, Vocals), Jordan Mann (Guitars, Vocals) and Matt Verrell (Drums, Vocals) are at the forefront of the “Grime Punk” movement. A disclaimer here. Punk, I get. Grime? Well grime I found out about when Stormzy had a rant about Theresa May and my left-wing orientated Twitter timeline went crazy.

But, essentially, as far as I – as a middle-class socialist in his mid-40s – can tell, harnesses the anger of the young in a similar way to which Billy Bragg gave mine a focus in the early 1980s.

And that anger runs through this stunning 12 songs like blood. So much so that if I am not the target market here, and I don’t fully understand the rage (blokes my age have Sleaford Mods or Frank Turner for that, after all) then I can recognise this: “Body Bag Your Scene” is brilliant, and original.

From the second it begins with an ominous chant, in “Accelerate” to the second it ends with the anthem – a promise, a vow, call it what you like – of “DIY” there is nothing that sounds like this.

“Kaboom” dismantles the Mainstream in about three minutes, the title track is a targeted attack on the record industry and “Black White And Grey” sneers “they ain’t even colours anyway” and it sounds like a threat.

Mention of the Sleaford Mods wasn’t accidental. If no one shines a light on the struggle of the working class better than the Midlander’s, then this does something similar for the urban youth. “In The Dark We Dwell” is as bleak a discussion on drug abuse as you will find anywhere, while the most “punk” if you will, is the “Sell Out”. “They don’t want artists…..” the lyric spits. It does so in a way that suggests you can’t stop them.

“Cut Your Teeth” is as hardcore as you like, while similar to the opening of this review, “For Old Times Sake” is a song about the ageing process written by a group that is nowhere near middle age, and no where approaching safe.

The aforementioned closing “DIY” is all the proof you need that they aren’t anywhere near done. “The BBC don’t wanna know, so we’ll sing to our larynx explodes…..”

That is a promise.

Years ago there was a band called manBREAK (sic) out of Liverpool that harnessed some of this. Then there was Asian Dub Foundation who did the crossover thing. But if you want an easy handle, if The Streets was fronting an indie band playing punk songs, then that’s as close as a reference as I’ve got.

This is not like other albums. This is not easy listening, and it is not going to give you a warm, fuzzy feeling. There is though, something about it you cannot – or should not – ignore. You do so at your peril because Riskee And The Ridicule are coming, whether you invite them in or not.