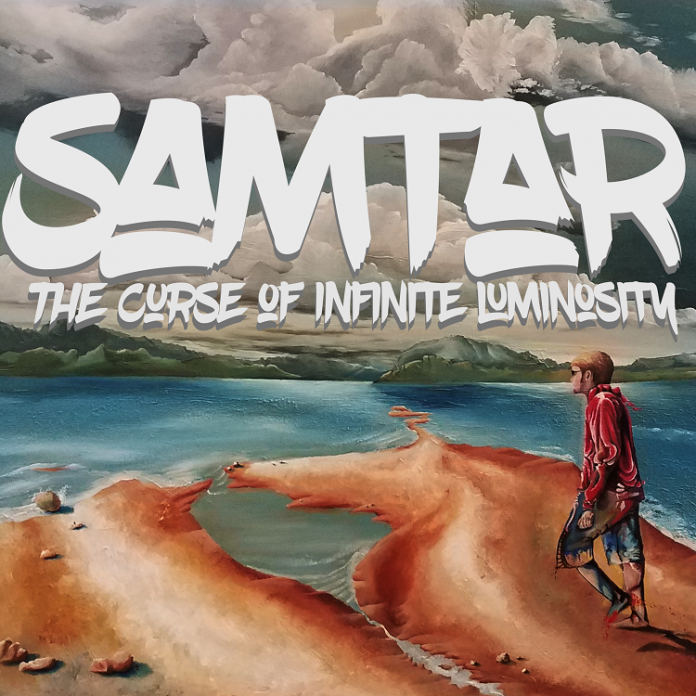 I am really fortunate, through this website, to hear and enjoy some weird and wonderful musical offerings and I really relish it when an album drops with me and I discover an artist that I’ve never heard of before. Samtar is one such musician. He`s an experimental solo artist who hails from the chilly depths of Madison, Wisconsin. His debut album “Plotting Against Reality” was released last July and sadly passed me by. However, he has a new album “The Curse of Infinite Luminosity” due out this week.

The album opens with `End Of The World` with a pounding bass line and drum cymbals crashing as the number bounces along. A quite upbeat piece which had me in mind of Talking Heads at times. There`s a much slower feel to `Shedding The Last Bit` not quite a ballad but it has a pleasing dreamlike quality about it.

`Wizard Of The Mountains` has quite a retro sixties feel with some wonderful intricate guitar chords, rolling drum beats and vocals that veer from quietly shared to almost hollered. A number that would not be out of place in a Tarantino movie. A dreamy, nigh on hypnotic number that retains a little edge follows with title track `The Curse of Infinite Luminosity`. It has a subtle guitar opening and solo towards the latter part of the song.

I found `Awake` to be an infectious and compelling composition delivered with a much deeper vocal. It reminded me of the early Moby tracks that were so entertaining. There`s a much faster pace to `Life Is A Party` which again is a further enthralling composition with another guitar solo.

`One Is Too Many` seemed really funky and had some superbly evocative drum, bass, and guitar arrangements. I felt `Slipping` offered something different a sort of electronica type structure with a drum machine and programmed strings. The lyrics seemed a little unnerving which added to the overall tension of this submission.

`The Science Of Irreversible Perception` is a vast electronic quite apocalyptic love song with vocals that seemed to portray a detachment from the song and depict an overall feeling of sorrow. There`s another cracking guitar solo just over halfway through. The stop start nature of `Waiting To Die` did seem to hint of Mike Patton era Faith No More and his own outfit Mr Bungle. A sort of post punk come art rock ode.

The album closes with `Island Of Eyes` a cracking rock piece that had it all with pounding drums, thumping bass, a guitar solo, synth swathes and wonderfully questioning lyrics. The full package.

I have to say I loved “The Curse of Infinite Luminosity” and it was hard to imagine that Samtar is in essence a one-man operation. Although he`s an experimental solo artist he covers a variety of genres with his absorbing and engrossing sound.

As to being The Curse of Infinite Luminosity, I’d argue this album`s more A Blessing of Limitless Radiance.