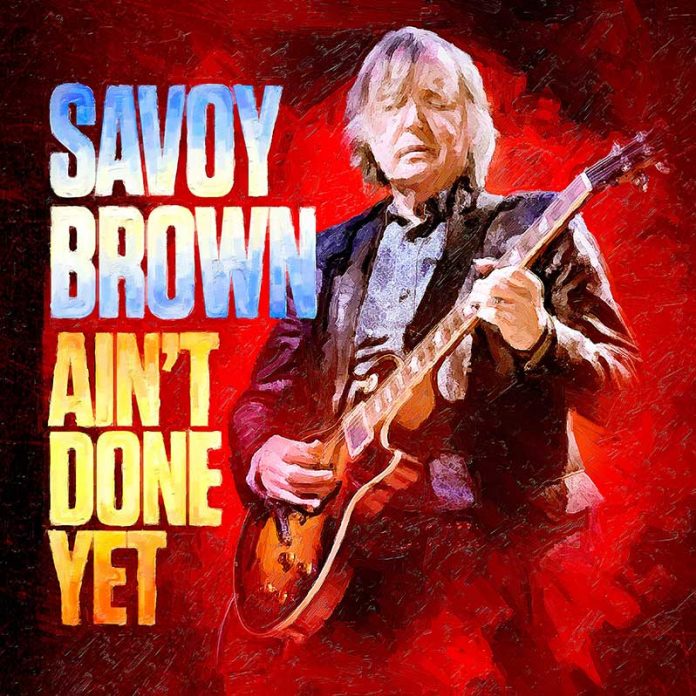 Riding the crest of a creative wave – their last album was barely 18 months ago – Savoy Brown are back with “Ain’t Done Yet”.

Now, there’s an obvious reason for the album to be called that, which conversely is why the title of the album is in the top line of this review. But nonetheless, its pertinent. Because Kim Simmonds might have been doing this for 50 years, but he’s got plenty to say.

The title track is full of imagery that backs that up. A boogie, with a slightly dirty air, but as classic as those in the blues club he used to run in Soho half a century ago, after leaving Wales with a guitar and a dream.

The first line, actually is enough to get you to suck a thoughtful tooth in a reverie. “The road can be place, many come and go. But its so hard to leave, when that is all you know.”

A quick look at Wikipedia and the former band members he’s had is enough to make you think that he means it, but “that is all you know….” Lets just focus there for a sec.

I saw Savoy Brown play last April, and these lines that I wrote seem to have even greater resonance. The context for this is Simmonds had just done a monologue about a cover he was playing.

“When he tells the story about why he plays the track, you can hear in his voice just how important this music has been to him for 60 years. That’s what gives this evening a warmth, a reverence, if you like. It’s not raucous like some would be, but what it actually becomes is a celebration of Blues Music.”

And all of that applies here. It has it’s moments of raucousness, it has moments where it floats on by, but goodness me, you won’t find a record played by any band that loves this music as much as Savoy Brown.

“All Gone Wrong” is one you can imagine him playing live. Catchy and urgent, it grooves. “Devil’s Highway” for all that it reads like an AC/DC title, isn’t a million miles away from something Mark Knopfler would do.  A kind of effortlessly sun-kissed affair, happy to watch the world go by, there are a few like it here.

There’s a definite “Southern Rock” overtone to “….Yet”. “River On The Rise” is one that was seemingly born on the bayou and ripped out of John Fogarty’s notebook. There’s something darker about “Borrowed Time” though – think Walter Trout in the “Battle Scars” era.

Mostly these songs can divide into two columns. The urgent ones and the contented ones. “Feel Like A Gypsy” (one that has been kicking around in Simmonds’ ideas for ages apparently) is certainly one of the latter and “Jaguar Car” is from the former. Not being a “car” person, I don’t get the quasi-sexual thing here (I drive a Honda Civic, what do I know?!) but I can appreciate a ZZ Top-type romp when I hear one, so fair do’s.

“Rocking In Louisiana” is one of the true highlights here. The whole band – Pat DeSalvo on bass and Garnett Grimm on drums complete the trio – sound like they are having a whale of a time on a song that is positively dipped in Cajun Sauce, and “Soho Girl” likewise, about the exotic woman of KS’s dreams is touched by Hendrix and couldn’t sound more ready for love if it tried.

As ever on Savoy Brown records it ends with an instrumental, and “Crying Guitar” is the best thing here too. For the same reason as why that cover at the gig seemed to define the night: Because playing the guitar – playing the blues guitar at that – is Kim Simmonds calling.

That cover he played in April 2019? “I’ll Keep On Singing The Blues” by Memphis Slim. You can bet he will, as well. It’s in his blood and he “Ain’t Done Yet”.