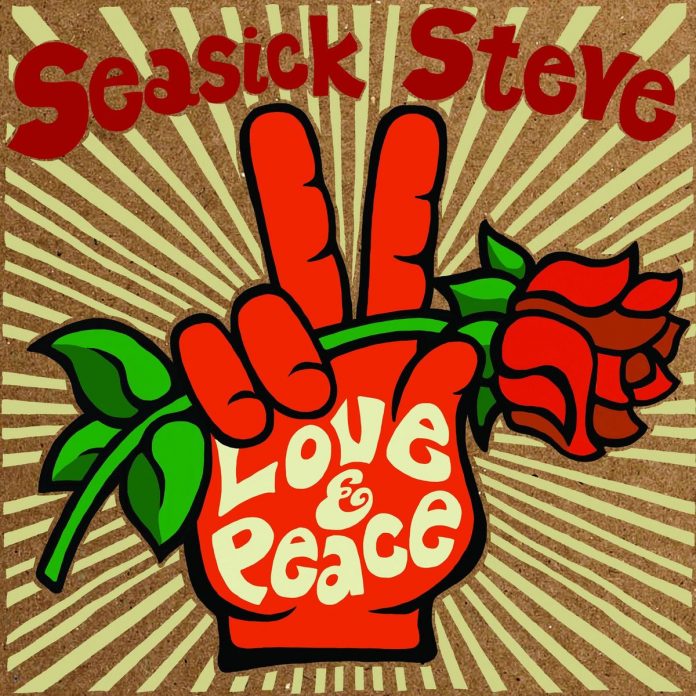 A Seasick Steve record, at this point, perhaps isn’t going to cause any musical surprises. You know what you are going to get – and lets be truthful here – there is a bit of that with “Love And Peace”, Steve’s 10th record.

But like so much of the hot air surrounding him, it doesn’t actually matter.

Instead, if I might suggest, if you want to get to the core of the issue, then there’s a couple of songs here that say it all:

First, there’s “Travellin’ Man”, on which he says this: “I am the king of hearts but I’m no heartbreaker, just doing my thing. I am the luckiest man in the whole wide world, I get to play and sing. I hope pretty soon I can do it for you when I come to your town We can get down and boogie, shake off the dust, we can kick it around.”

Then, there’s the title track: “Hey, man, I got an idea. You wanna hear? Or are you just too busy, now? Try a little respect. Common courtesy Just a little respect. Be nice to each other, you see. Gotta stop the hatred, now. Get back to love and peace.”

So there you have it. He is just a bloke who wants to play his guitar, and wants us all to get back to being a bit more decent to each other. Sorted.

Well yeah, but only kind of.

The song “Love And Peace” is perhaps the best here, because its one of the most urgent and funky, a few too many times the record has the suggestion like its stoned in some 60s hippie commune. Take “Regular Man” it has a classic blues sound. Howlin’ Wolf vibes and the harmonica is as righteous as it gets, but it meanders a bit. Like Gov’t Mule or the Grateful Dead, say, it is good, but you wouldn’t mind it sticking to the point.

Maybe in fairness it was supposed to wander, but “I Will Do For You” wafts a little where you’d like to have a little greater emotion. The musicianship, of course, is from the top draw. The grooves of “Clock Is Running” are one of the highlights and “Carni Days” has a flavour of Dylan (lest we forget one of the more spurious claims of Seasick was that he was born in the same year as Bob) and its acoustic, real busker feel is a real talent.

If those are the engine room, then they are joined by  “Church Of Me” and “Toes In The Mud”, “My Woman” seems to lack a spark somehow, and there’s no doubt – to me anyway – that this record is better on the likes of “Ain’t Nothing Like The Boogie”, which is driven by its percussion, and is better than “Ready Or Not” which is a little bit blues by numbers almost.

“Mercy”, the closer falls into that too. It’s not a bad song, not at all, but you’ve heard it before.

Ultimately that’s the case with “Love And Peace” as a collection. It’s superbly conceived, and sounds great, but is it maybe just a little superficial? That’s not even a comment on the whole backstory thing, frankly, like the narrative of a concept album, I couldn’t care less. Whether Seasick Steve was homeless or not is about as relevant to this as whether Marilyn Manson was in the Wonder Years, who cares?

It might a be – like the recent Dylan record – an album you need to immerse yourself in for ages. But as a record that enables him to play live, where he truly excels, this will do just fine.