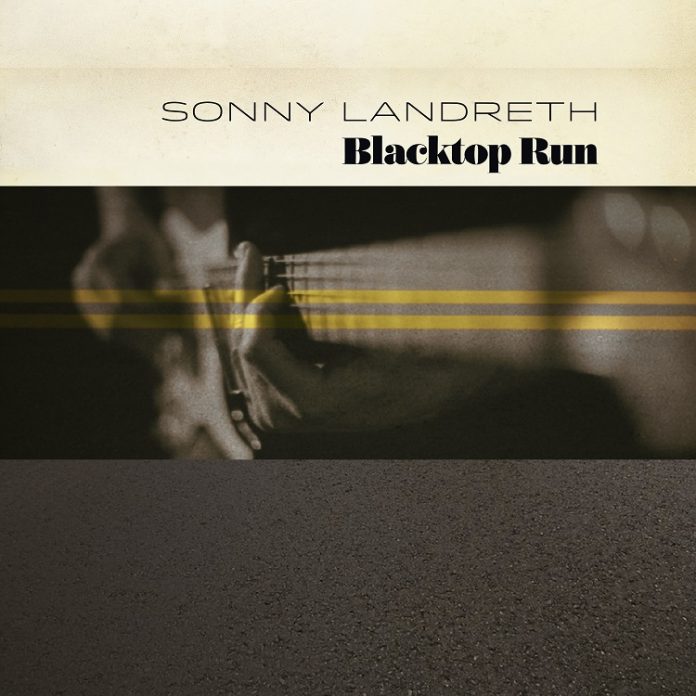 Everything brilliant about Sonny Landreth is encapsulated in this sentence from his Wiki Page.

Under “Discography” it says simply this: “Landreth has released at least the following albums.”

He probably doesn’t even remember himself, but it is indicative of a man for whom music matters. The music, not the business, is what surely drives someone like him.

There is just a warmth, a love of the craft, that runs through his work, and its been there ever since I first came across him on some Mark Knopfler stuff years ago, and which he injected onto the Erja Lyytinen record from last year.

His own collections are often more experimental, and “Blacktop Run” is no different. The key thing with Landreth, though is the simplicity. Usually words like “experimental” and “challenging” see me running for the nearest cover, but never with Sonny, because he – rather like the similarly gifted but ever-entertaining Paul Gilbert – always finds a way of engaging the listener and bringing them along on the journey, rather than leaving them dazzled with tech wizardry but ultimately on the outside.

Not here, you are all in for the ride.

“Beyond Borders”, is warm and proof that not just Landreth, but everyone on this record, is at the top of their game. Something I have always loved about his work is that unlike some he is content to let the guitar be a part of the song rather than the be all and end all.

Here, for example, Steve Conn (who writes a couple of them) is right to the fore with his wonderful keys work, while the title track is dappled in a sunlight. You can imagine the sun going down on the back porch as it plays out.

The Accordion drenched “Don’t Ask Me” – sample line: “don’t ask me to explain it, I don’t know what I am doing here” –  is simply brilliant, and the blues ripper of “Groovy Goddess” changes the vibe completely.

A feature of the record in general is that nothing is too long. “Lover Dance With Me” will no doubt have the musos salivating, given it’s a break with the norm. Those of us that wouldn’t know one chord from another and wouldn’t ….urmmm…..fret about it, either (sorry) can instead just appreciate the glory of its three minutes.

“Many Worlds” is floating, almost dream like it seems, and the four instrumentals in the “engine room” if you will of this,  are matched by  the playful “Mule”, which inverts the usual “woman done me wrong” blues norms, by telling the tale from both points of view.

Perhaps the best of the lot, is the darker ballad “Somebody Gotta Make A Move”, right in the middle of the thing, as if the centre piece, and if “Wilds Of Wonder” – a lamnent on climate change  – has a more contemporary feel, it is the closing cut ,“Something Grandwhich underlines what I said about Landreth not caring about anything other than the song itself. There is no solo here, it doesn’t need one. That’s the point.

Only a true great would know they don’t have to prove it every time, and there’s a feeling here that these songs just exist, not to fit some “plan” but simply because they needed – and deserved – to be heard.

This is a quite wonderful example of both musicianship and songcraft. Many have one or the other. Few have both.