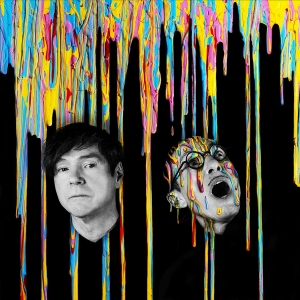 American new wave, art rock, synth pop duo, brothers Ron and Russell Mael formed a band originally under the name of Urban Renewal Project, in 1967, relocated to Blighty, in the mid-seventies and as Sparks, after almost topping the charts with `This Town Ain’t Big Enough for Both of Us` in 1974, they haven`t stopped entertaining us with their unique talent. The brothers Mael almost seem like my eccentric cousins or Uncles, who come and visit every couple of years and as their last album was the critically acclaimed Hippopotamus back in September 2017, this visit was welcomed. The reason, their twenty forth studio album ‘A Steady Drip, Drip, Drip’

`All That` opens the album and it`s almost like the guys have thrown down the gauntlet for the rest of what`s to follow. A strummed acoustic guitar, clapped hands, and Russell`s fine voice begins us on the

path of this really anthemic offering. A superb Wurlitzer type organ joins in as this tale of a long-term relationship is shared but could it be about the brothers own relationship? Who knows, who cares. I can just see all those swaying bodies, arms raised in the air and everyone singing along when finally, we get to hear this in a live situation. The opposite sentiment is shared on `I’m Toast` a real rock out offering where it almost sounds like Russell is singing through a megaphone at times. A story of somebody realising they have fallen out of favour, become second-hand news and need to exit sharply. Wonderful stuff.

`Lawnmower` is an elegy to the garden appliance. There`s a hypnotic harmony of “La La La`s” in the background as the benefits of this grass cutting machine are recounted. The lyrics are sublime with a girlfriend from Andover, who initially puts up with this obsession then packs her Land Rover to leave as  the fixated narrator shares “your lawn will be a showstopper, jawdropper” I assumed that this ode would be a first in praise of a lawn mower but a quick trawl on social media brought up all sorts including a lawn mower rap. I think we`ll just have to settle on it bring the best.

`Sainthood Is Not In Your Future` is a tale of an unpleasant character, who by their behaviour will not be canonized any time soon. A pulsing key synth allows the vocals which are almost spoken word / chanted or shared in a marching cadence style coasting along as at intervals down the way we enjoy sung passages while an acoustic guitar is strummed at pace. A ditty that will have you tapping away.

Sparks have always had that ability to vary styles and tempo and this is clearly expressed with `Pacific Standard Time` a ballad in a similar vein to their hit of the mid-seventies `Never Turn Your Back On Mother Earth. A delightful memorable tune written about a time zone which is used by American States such as California, Nevada, and Washington and also some of British Columbia in Canada. Why? It doesn`t really matter, but it allows Ron to feature his wonderful piano skills and Russell to showcase his superb wide-ranging voice.

`Stravinsky’s Only Hit` is a sort of satire on the Russian composer, pianist, and conductor Igor Stravinsky, written from an imaginary person, who claims to have written the words to a popular song of his and continues to relate the composer`s life in a form of a parody. The story is offered mostly in an orchestral style. Pure Genius. Ironically, `Left Out In The Cold` has a real humid flamenco, salsa identity about it, as It`s a contrast to what it`s relates to. A narrative of somebody employed by a Japanese casual wear designer, manufacturer and retailer testing and researching their product in Winnipeg. As the winter air there is usually north of the Jet Stream, under a cold air mass, with fast winds that come from the North-West, the wind chill is brutal. I would defy anybody to not dance along to this one, its so infectious.

`Self-Effacing` as it says on the tin is about a shy, extremely unassuming, and modest individual, trying to make themselves seem unnoticeable, The amusing lyrics are accentuated with a compelling and rhythmic melody that brought back to mind memories of former Sparks earworms such as `Happy Hunting Ground` from the mid-seventies. A rendition of a hard-working accountant, who dreams of the success of a novel that he spends most of his free time penning is shared with `One For The Ages.` The musical composition brings a touching poignancy and tenderness that will have you rooting for the subject but knowing that failure is almost inevitable.

I must admit that when I saw `Onomato Pia`, I thought I know what that is but couldn`t quite figure it out without a search on the net. Well, Onomatopoeia is in fact a poetic structure of words to convey how something sounds such as slam or splash. But with Sparks adding their subtle twist it relates to an Italian prima donna with a “communication flair” brilliantly set to an almost mini musical comic opera style worthy of Gilbert and Sullivan. `iPhone` is a swipe at the inappropriate and overuse of modern technology which imagines scenarios where everybody from the first man Adam, US President Abraham Lincoln at the Gettysburg Address and the wife of the co-creator of the device get exasperated enough to scream “ Put your fucking iPhone down and listen to me” The sentiment is shared in a quite entrancing way over an avant-garde electronic musical backdrop.

`The Existential Threat` begins with a free-flowing saxophone before we enjoy an account of an individual`s anxiety over the fear of a possible occurrence that could cause their extinction. A variety of scenarios are offered as dread sets in. The raconteur manages to convince themselves that only the philosophers Jean-Paul Sartre and Albert Camus understand their predicament and imagines them gathering in the Parisian café Les Deux Magots, a meeting place of the literary and intellectual élite where they come to blows.  The feeling of panic is amplified with the saga being expressed against a charming klezmer melody. We get a mid-paced musical offering with `Nothing Travels Faster Than The Speed Of Light` where although the statement is correct, the chronicler will argue the point and sites the time taken to visit their impatient partner. There`s a gentle piano interlude midway through with a tambourine accompaniment and some cleaver harmonies towards the end. The album concludes with `Please Don`t Fuck Up My World` a fairly obvious plea to protect the planet, that is dispensed against a backdrop of piano, strummed guitars and for added poignancy the vocal harmonies of the Coldwater Canyon Youth Choir, who may exist or are they maybe Russell`s altered vocals.

After nigh on fifty years in the business, you could forgive these guys for resting on their laurels but no, not these fellas. This album full of intelligent, sophisticated, idiosyncratic, sarcastic, astute and at times prickly lyrics covering themes where nothing is off limits. Who else would cover such diverse topics from garden appliances, time zones, Sainthood, composers, clothing research to environmental issues and set them to such danceable, melodic, and memorable tunes?  These siblings never fail to deliver and like a vintage fine wine, they seem to get better as they mature. This latest release is a true masterpiece.