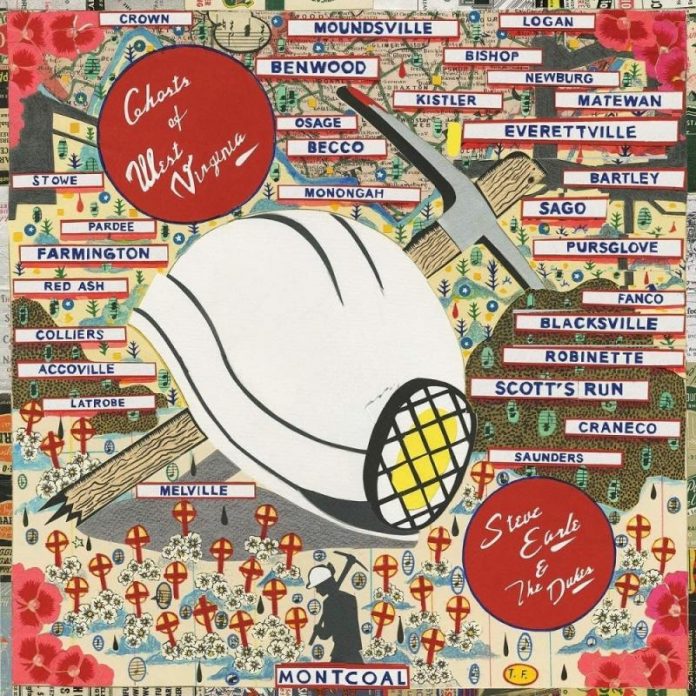 There’s only one place to start with “The Ghosts Of West Virginia” and its with these lines: “It’s about fathers, it’s about sons, its about lovers waking up in the middle of the night alone.”.

Not only is “It’s About Blood” – the song where they come from – the best song Steve Earle has written for years, but it frames the entire record.

The second verse goes on: “don’t wanna hear about the state of the economy, fiscal reality, profit and loss, none of that matters when you’re underground anyway, you damn sure can’t tell me nothing ‘bout cost”.

That verse, nails capitalism. Right there. Profit and loss over people. Bottom lines over flesh and bone.

I don’t hide my political beliefs, never will, I am proud of them. And they all stem from this. When I was little my Grandad said this to me: “Money doesn’t talk, son. It shouts, loudly.”

Which is why these stories matter. This is the story of 29 miners going to work in West Virginia and not coming home. And that is equally why when Earle reels the names of the men that died in the disaster, he does so with so much emotion.

“The Ghosts Of West Virginia” is about half an hour long – almost as if it is deliberately matching the death toll?  – and is broadly split between the folk, singer/songwriter/traditional bluegrass stuff that Earle has been doing since the late 90s.

“Heaven Ain’t Going Nowhere”, the A Capella opener is equal parts Southern Gospel and Chain Gang, “Union, God And Country” is resolutely blue collar, almost a history of the working class in three minutes – “that’s why they made the union,” he muses, over a traditional folk structure. “they had nothing left to lose.”

Modern, if you will, Steve Earle, is perhaps best shown in “Devil Put The Coal In The Ground”, a banjo lick, an almost dance beat and the way he speaks the vocal line that is all his own. The Dukes (And Duchesses) are in fine form here too. There is a real chemistry between them.

“John Henry Was A Steel Driving Man” is as Trad as this gets. A proud 21st century update of the old tale. With a proper dust roads, pre war feel too. It is balanced  deftly by the tender ballad, “Times Was Never On Our Side”. One of three moments of real beauty here. “Untold billions lived and died” offers Earle, and he does so with a real light touch.

The beauty in the coal dust, though, is never more to the fore than on the gorgeous “If I Could See Your Face Again”, sung by Eleanor Whitmore and from the point of view of a mining widow, it is a thing of real hope, somehow.

“Black Lung” manages to make the words: “sorry honey, Grandaddy’s dying of black lung” sound upbeat. Maybe it’s the acceptance? As he points out: “half a life is better than no life at all”, and the struggle of the working class was perhaps ever thus.

“Fastest Man Alive” is infused with the spirit of traditional rock n roll and is as close as this gets to a hoedown – by way of Dylan in the 60s, too, and as if to prove that the more things change, perhaps the more they stay the same, the last song “The Mine” tells the story of a man who is desperate to join is brother working down under the ground. “I reckon the first thing I am gonna get me, is a brand new Baby Blue Camaro for you. Hey babe, we’ll ride in style that day babe, down the main street mile that day, babe”.

The feeling that it is still the only way out for people is all over this, it really is. Which is probably what Earle means when he speaks about this being designed to “talk to the folks who didn’t vote the way I did.” Whether Trump’s base are listening, I can’t say, sitting thousands of miles away and with our own bunch of populist liars in charge too. What I do know is If Earle has covered mining before, largely in his “The Mountain” record, then “Ghosts Of West Virginia” is not only his most focussed work for a long time, its probably his best – and certainly the most fired up he’s been – since “The Revolution Starts Now.”

The ghosts of the past are all here, as they should be, but it still manages to look forward, and that is a true skill.