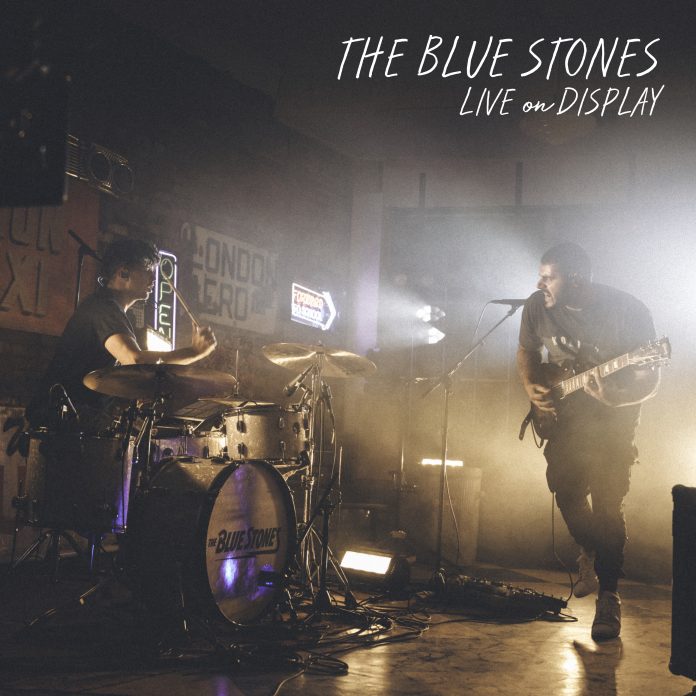 The Blue Stones are a Canadian blues rock duo comprising Tarek Jafar (vocals/guitar) and Justin Tessier (drums). The guys are based in Windsor, Ontario and will release their second album in early 2021, a follow up to their debut album, “Black Holes.”

The have recently released their “Live On Display EP” which features live and studio versions of four singles. The live cuts were recorded at Ontario antique store, Smash Salvage.

This extended play opens with `Let It Ride` a real blistering rock anthem. There`s some delightful guitar riffs and thumping drums. Tarek has an ability to flex and adapt his vocal delivery as this track weaves its way along. A sort of narrative on how life is as a musician.

There`s a slight grungy feel to `Grim` with a reverberating guitar riff accompanying a driving drum beat as the song progresses. The lyrics are almost rapped at times and seem to have a certain bravado heading towards arrogance about them.

`Careless` is a more laid back quite bluesy number that enjoys some delightful almost dreamy guitar riffs. The lyrical content is again shared in a rap format but in a more wistful thoughtful way. This release closes with `Shakin’ Off The Rust` which charted Top five at U.S. radio on the Billboard Mainstream Rock Radio and has seen over eleven million streams worldwide. It would seem to relate to hitting a low in life and turning it around. The track builds slowly from just a twinkling piano and vocals to a quite full-on melodious rock assault.

The “Live On Display EP” was a little different to a filler between albums release as the fellas took the time to record the four numbers live and raw and put them together with their respective recorded versions. These compositions seem to highlight a slight change in direction for the band with a couple of the numbers being shared with a slight rap element. A sign perhaps of a band growing in confidence not only in their own abilities but also musically.