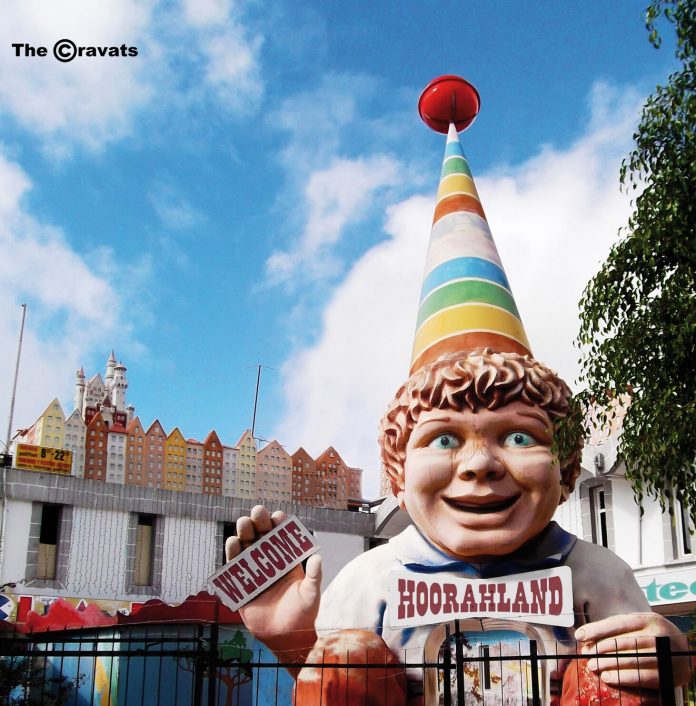 The Cravats are a punk rock band, originating from Redditch in north-east Worcestershire, England, approximately 15 miles south of Birmingham. Apart from Led Zeppelin`s drummer John Bonham, Rick Mayall`s Kevin Turvey and the manufacture of needle and fishing tackle supplies, the band are this town`s most famous export. The first recorded mention of Redditch is in 1348, the year of the outbreak of the Black death so this may go some way to understanding the groups DNA. They formed in 1977 and were championed by the late John Peel, called a halt to proceedings in the mid-eighties and it wasn’t until the 2006 release of ‘The Land of The Giants’ double CD compilation on Overground Records that many folk realised what they’d missed. Co-founder The Shend (Chris Harz) and original Saxophone & Clarinet player Svor Naan, along with fellow Redditcharian Rampton Garstang on drums, resurrected a live version of the band in 2009 but it is only since the addition of Viscount Biscuits on guitar and Joe 91 on bass that they decided to record new material, which was the critically acclaimed “Dustbin of Sound” their first new LP in thirty five years, released in 2017. They follow this opus with a new release containing a dozen more songs under the banner of “Hoorahland”

A wailing saxophone prior to a strumming guitar chord join the almost hypnotic drums and bass line before The Shend`s questioning vocals take us on a ride through the opening track `Goody Goody Gum Drops` Along the way famed individuals such as Muhammed Ali, Salvador Dali, Clint Eastwood and John Barry get name checked in this delightful cacophony of noise. At times I feel like i`m listening to something I can only equate to early Roxy Music on acid. Never has a childhood expression of delight been made to feel so unnerving, `Shy` is anything but and continues on in sax led frenzy of sound with some wonderfully relentless drumming as the lyrics are recounted atop, some bizarrely brilliant such as “Diffidently disinclined nervous ill at ease, You go on ahead while I hide behind these trees” The song ends with one word “Terrified” shared in an almost petrified pitch.

We get a view into the day in the life of somebody who is a solitary but not really lonely figure with `Same Day` The tale is almost a “same day same s**t” scenario simply shared against a hauntingly evocative musical backdrop with some subtlety quasi-metal guitar riffs. Former vocalist of hardcore punk band the Dead Kennedys, Jello Biafra duets with The Shend on `Now The Magic Has Gone`, a song about two ageing theatre queens whose everlasting love has tragically fragmented into a thousand shards of bitter hate. This tale of a love gone bad is offered against a sort of sick fairground attraction vibe. A Wurlitzer of sorts which reminded me of the sinister theme tune of the “Tales Of The Unexpected” television series of the late seventies, early eighties.

At just under six minutes in length `Good For You` is a thoroughly enjoyably disturbing, jazzy nearly abstract musical piece with the lyrical content almost remotely shared, with vocals sounding like they`re coming through a pipe, they are that distant. A tale of a comfortably off individual, who seems to relish their financial and personal security. A conceptual piece that would blend wonderfully in a David Lynch film. There`s an odd mix match of sounds on `Oh How We Laughed` a strange contribution, with the Shend intoning “Hoorahland” throughout the movement, a sort of experiment the band Can may have created if they were still around today.

The quirky `There Is No God` follows, whose subject matter is really all in the title. A nice musically avant-garde slice with the vocals offering up thoughts on our existence and ending with a sort of ethical question of How does that make you feel. Good or bad? There`s a sort of rant against the shrewdness of corporate governance or capitalists of the perceived rat race with `March Of The Business Acumen`

The questioning lyrics are almost rapped against a churning continual grinding background.

`Trees & Birds & Flowers & Sky` is quite possibly the bands slant on a nuclear apocalyptic scenario happening, foretold over a beguiling controlled wall of noise. If i`m honest I just sat back and took in the joy of `Jam Rabbits`, saying the lyrics were a little abstract would be an understatement of fact. They are beyond bizarre but are set to a most enjoyable earwig of musical content. The penultimate track on this LP is `Morris Marina` which for younger readers was a popular family car, produced by the now defunct British Leyland throughout the 1970`s. it has frequently been described by journalists, authors and motoring critics as one of the worst cars of all time. The song is almost a catalogue of faults associated with said vehicle recounted alongside a slightly menacing assortment of sounds. Title track `Hoorahland` closes out the album with it`s stop start musical tones allowing The Shend to share almost what it must be like to visit the Cravat`s wonderful world of weird.

These guys are undoubtedly Idiosyncratic, eccentric and curious as a band and the music they offer up is somewhat diverse and at times a little oddball but most of all it`s original, unique and thought provoking. This album is a cracker and a real continuation of the furrow they ploughed with 2017`s “Dustbin Of Sound” Similar to busses, you wait a long time for one to arrive, then two almost come together. Welcome once again to the brilliantly inimitable world of The Cravats.