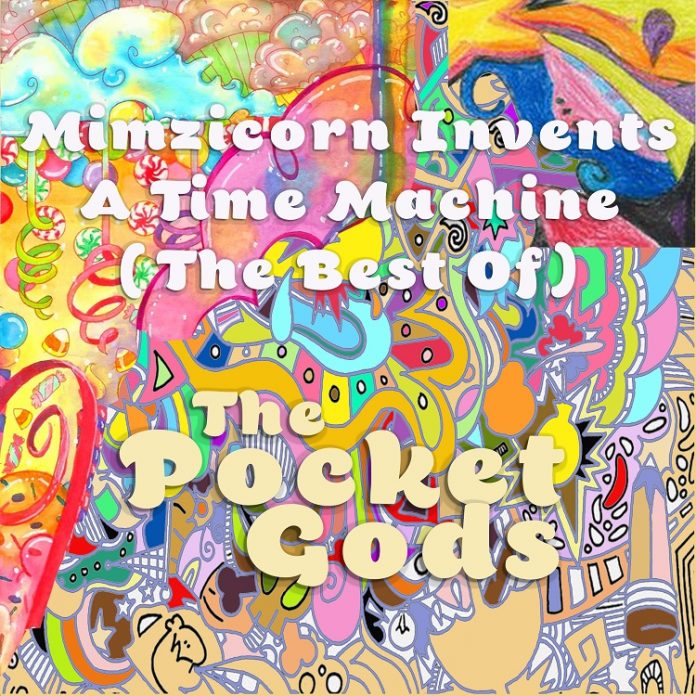 I’d never heard of The Pocket Gods and after a quick listen I assumed they were some sixties American fad band but no, they are a cult British indie pop band from St Albans founded in the late nineties by lead songwriter Mark Christopher Lee (sometimes known as M.C. Lee). They were discovered by the late John Peel and recently championed by the likes of Tom Robinson from BBC 6 Music. After searching the net, always dangerous, I find that The band have released 67 albums and 40 plus singles and Eps and are infamous for their album of 100 sings all 30 seconds long, written in response to low royalty rates from the likes of Spotify. The band have also simultaneously released a best of these 30 second song albums (there are now nine including the official Guinness World Record Breaking Album 300X30).

They release their Best Of album “Mimzicorn Invents A Time Machine”, an album that covers their twenty-two years hopping from lo-fi indie to electro-funk and psychedelic pop. Mark Christopher Lee’s battle with depression and mental health issues have plagued his life and he’s now determined to encourage others to seek help and support for depression and mental health issues. His Experience was shown in the bands own rocumentary `Weird The Life And Times Of A Pocket God`, which has been described as “Spinal Tap meets One Flew Over The Cuckoo’s Nest.”

The album opens with `Searching For the Divine` and it`s a wonderful psychedelic trip with a dance like vibe which has some great brass, shimmering guitar chords and a tambourine being shook along giving it a quite hypnotic feeling. A more hippy bohemian reflection comes with `Music From Crap Cartoons` which had me singing along at the chorus to the lyrics of “I`m going down to the forest today, i`m going to pick some flowers today” which has some distorted harmonies.

At just over a minute long `Dracula AD 72` is a no-nonsense chunk of pure punk with fuzzy guitars and distorted vocals. `The Knights Templar Are Hangin Out At My Local` is another marvellous piece of sixties nostalgia, a shoe in for a flake advert in my opinion.

A fair portion of `Billy Childish Enters The Space Race` is spoken word with musical accompaniment. A song which could have been the love child of Frank Sidebottom and The Fall. Although the subject matter of `If I Have Another Drink (It Will Kill Me) is pretty serious, the song is a fabulous slice of upbeat joyful pop.

I felt that `Carry On Behind` wouldn`t have been out of place in a Buzzcocks set with `Noise Annoys` and `Why Can`t I Touch It` and `Jombal Party` is another punk ditty with the vocals seemingly ironically shred.

`Celebrate` had a sort of alternative country feel about it. Whereas, there`s a sixties feel to `Take Me Down To Oak Island` a place of buried treasure and unexplained objects found on or near this island in Nova Scotia. `Diet Of Elvis` wasn`t quite what I was expecting. A sort of jazzy piano, shuffled drum, and bass with a montage of seemingly spoken word clips of people relating tales of the hillbilly cat. Odd but enchanting. Oak Island appears again with the bizarre `Black Friday On Oak Island` a sort of art rock offering which has a mesmerising texture.

`Deep Fake` is a fast paced poppy number that has the repetitive chorus of “La La La La La La Lala La You`re a deep fake, you`re a deep fake” simple but enthralling. `Dandelion` is mostly an instrumental track which has a lot of charm, although we do enjoy infrequent la la la`s and some beautiful guitar riffs.

There`s a tribute to science fiction, crime, and horror B Movie film director with `I’m The Ed Wood Of Indie Pop` which is in essence an indie rock requiem.

We have a melancholic ode with `Tuesday Night Socialist Club`before enjoying the off the wall `Zeta Reticuli` with vocals almost submerged in a cacophony of sound and snippets of space data. Zeta Reticuli being a wide binary star system in the southern constellation of Reticulum, it sort of makes sense.  It ends with a splash of the lullaby Twinkle Twinkle Little Star, sublime.

The penultimate song `The Rich Go Off To Space` felt like a throwback to the west coast psychedelic sixties and reminded me of The Strawberry Alarm Clock. `Bermudarectangular` closes out the album and it`s another mix match of sounds. A quite trance like beat sets up a platform for some sci fi or space age samples along with some clips of recorded space data. It`s not quite Joe Meek but it`s certainly heading towards.

Frontman Mark Christopher Lee has been described as a slightly more tuneful version of Mark E Smith from The Fall and has been called a Wilful Maverick, which is probably a fair summation. I thoroughly enjoyed this album. It was really eclectic, varied in style and sound but was utterly entertaining. If you have an hour to spare you could do worse than giving this a listen and enjoying a Jombal Party, a trip to Oak Island, hanging out with the Knights Templar at your local or entering the space race with Billy Childish. It would be ungracious not to get on board Mimzicorn`s time machine as wherever it takes you, it`ll be a blast.