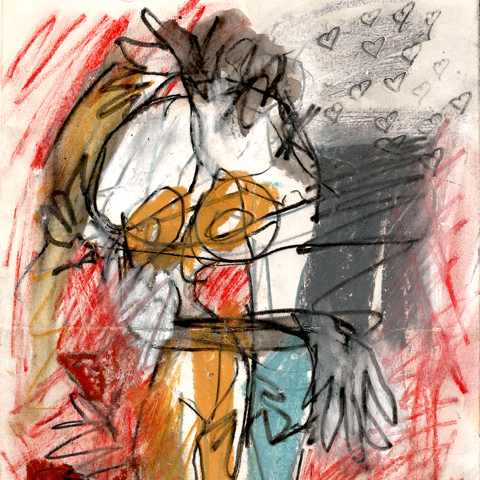 The Sad Song Co. is the project of Nigel Powell, previously writer / player / producer in Unbelievable Truth, also known for drumming in Frank Turner And The Sleeping Souls and Dive Dive. In 2020 he parted company with Frank Turner after fourteen years and is concentrating on The Sad Song Co. There`s an imminent album due called “Saudade” written, recorded, played, and mixed entirely by Powell which touches upon love and loss, politics, and the pandemic, and finding your way through a world upside down.

The album opens with the title track ‘Saudade‘ which is an instrumental. The definition of Saudade is a deep emotional state of nostalgic or profound melancholic longing for an absent something or someone that one cares for and/or loves. Moreover, it often carries a repressed knowledge that the object of longing might never be had again. The track begins with a couple of piano keys repetitively played then progresses with drums, bass, and an off-kilter synth. A quite reflective almost introspective piece that needs a few plays to really gel. The absence of the person Nigel has “a lot of history with” is very much present in the emotional core of `These Tears won`t Cry Themselves` as you can hear the resonating ache in his vocal delivery which has to be said is shared over a tune that is reminiscent of Radiohead but takes an almost modified slowed down drum and bass form towards the end.

`Hold` is a lot more uplifting musically with some pounding drums and slightly eclectic guitar chords and some synth swathes. A melodic tale of hope against hope possibly. I`m led to believe that `Hastings, Out of Season’ was written around musings upon death. It`s a quite elaborate composition that has a piano melody that drives it along and a consistent drum beat that sets the pace. The vocal seems to ebb and flow throughout the piece and is subtlety complementary.

‘Mukarska Sunset, 25th May 2018’ is a brief piano instrumental that Nigel relates to being “the happiest I remember being in my entire life, looking back from now at that moment, it’s recognising the happiness of that moment but feeling the melancholy that that situation is no longer.” The chiming piano keys in `Away Until Christmas Morning` did give it a festive feel but this number could have come from the irresistible melodious songbook of Neil Finn and Crowded House. A wonderfully appealing submission.

We enjoy a more unsettling pensive arrangement with `Deserted By Every God` a quite desolate meditative piece. A bittersweet song of unrequited love follows with ‘My Saccharine’. The artist has stated that “It’s a song about the love of my life and trying to let go because I know it’s not good for me to hang on​.” It`s the sort of number that gets under your skin and stays with you. An immense quite grandiose sound which has some delightfully engaging strings towards the latter part.

A song inspired by a fever dream Powell had involving “a powerful, orange man who inherited great wealth and power, and uses it to buy the key to immortality” comes with ‘Feeding’. It weighs-up the forces of power, responsibility, and karma against a quite electronic backdrop with occasional slide guitar leaving a lasting impression of a disturbing nightmare rather than a vivid dream. There`s an intense stripped back offering with `Lighthouse` with just piano and vocal for the most part, it seems to relate to the breakdown of a relationship and if the bleak musical background reflected is anything to go by, It would seem the situation is beyond repair.

The album closes with `Sine Qua Non` originally a Latin legal term for “Without which, not”. Though this may sound like gibberish, it means more or less “Without (something), (something else) won’t be possible”, simply put something that’s part of you. An instrumental composition that seems to encompass all sorts of melodic mood swings along the way.

What I do appreciate about albums like “Saudade” is that they need a little time to seep in and also either the titles or lyrics need a little deciphering. It makes you feel that you`ve earned the right to enjoy it and savour it as i did. The themes of love, loss, politics, the pandemic, and an uncertain world are shared through some wonderfully melodic soundscapes with lyrics that are at times moving, poignant, emotive, heartfelt but most of all engaging. Nigel Powell`s voice sat midway between Marillion`s Steve Hogarth and Crowded House`s Neil Finn which is no bad place. This multi-instrumentalist has shared some deeply personal insights that i`m sure will have been quite cathartic.

On the strength of this release, I for one am happy to join The Sad Song Co.