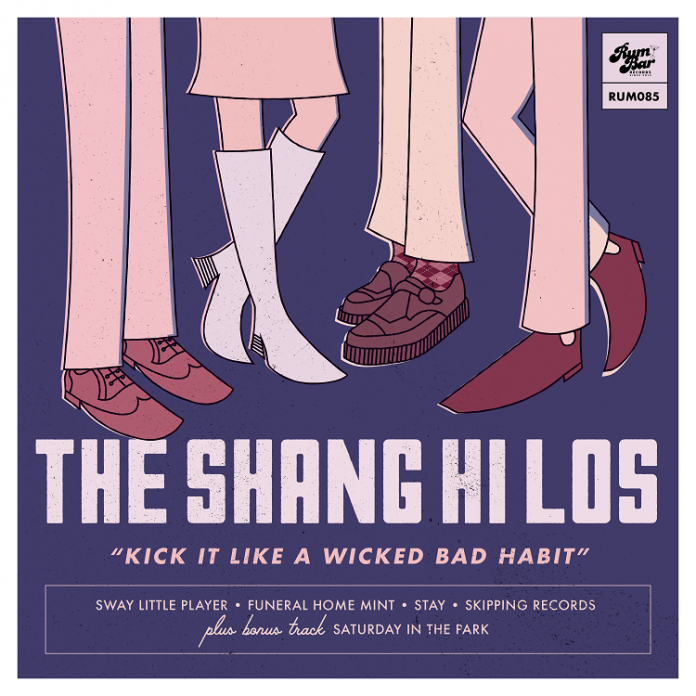 It’s a wonderful thing when people do things because, well, just that they want to.

That’s the case with the Shag Hi Los.

They are basically what happened when Dan Kopka (of Watts, MV faves if ever there was!) and Jen D’Angora of Jen and the Delinquents decided it’d be fun to make a record that came from their love of the girl groups of the 60s and the nu-wave bands from the early 1980s.

To be fair, in all honesty, that is mostly what you need to know about “Kick It Like A Wicked Bad Habit”, because for 17 minutes and five glorious songs, that’s what it provides.

“Sway Little Player” is a window on a world so innocent that you half expect there was a chaperone present when they recorded it. It’s the rock n roll that I imagine the 50s in America to have been full of, sweet sounds and sweet words.

“Funeral Home Mint” is from the other column. The 80s. I hadn’t a clue what nu-wave was when I saved up my pocket money to buy the Best Of Blondie, but this is cut from that cloth, D’Angora and Kopka sharing harmonies over the lead. If you can imagine what The Go-Gos would have sounded like if a bloke had been in the band, then you’re kinda there.

“Stay” builds into something that is pop music from the top draw, while the low slung, almost Stones stuff on “Skipping Records” is as bouncy as “Jumpin’ Jack Flash” but the harmonies are as bubblegum as it gets.

If we haven’t mentioned the other members of the band yet – the lo’s to the hi’s as it were – the rhythm section (like Dan and Jen Lee Harrington and Chuck Ferreira are lifers in the Boston scene) add some real grit and power.

That said, though, this is a record that is about harmony, hooks and fun, and as the summer sun is shot through “Saturday In The Park”, which has just a hint of Mott about it, then the only conclusion is to say that it’s delivered on all fronts – and then some.

Whether it’s something more permanent or just a one off then “Kick It Like A Wicked Bad Habit” is addictive as anything that is no good for you, but more than that is a real gem.