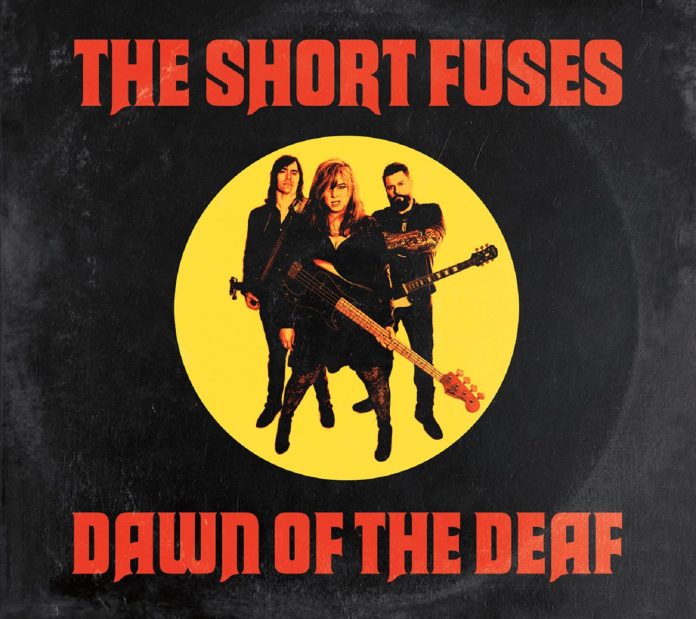 I love the opening exchanges to anything.

Football matches. It sets the tone. Cricket, show some intent. A film, don’t bore me.

Albums. I often know exactly whether I am going to review one based on the first verse. I am very rarely wrong.

I wasn’t here, either.

The Short Fuses first record for 15 years starts with Georgia Peach cast as some kind of fire and brimstone preacher, before she sneers “rise up, baby, do your thing”. At this point, the Fuses explode as it were. Some sort of hybrid of Motorhead and the The Go-Go’s.

Do your thing indeed.

Now, I know what you’re thinking. Anyone can have one good song and that’s true. Hell, even Shinedown had “Devour” right? But when it comes to “Dawn Of The Deaf” it ain’t just “Baby’s Got Bat Wings”, it’s the other nine glorious ones.

It’s a shit of a job picking the best track here too. Like, is it the one that sounds like The Wildhearts brawling with Joan Jett in a dingy strip club? That one’s called “The Pink” by the way and the way its sung means that everyone here knows what’s going in the pink tonight, as it were.

Or maybe it’s “Motorcycle Pill”, which has more energy than Wacky Races on Speed? Well, no its not. It’s “Rockford Getaway”, which literally sounds like the best 70s cop show. It’s tempting to imagine Peach, Travis Ramin, and Justin Staggs as some crime fighting trio. It’d be fantastic too, and this basically was the song that thought Clutch’s “X-Ray Visions” wasn’t exciting enough and upped it a notch. How you improve perfection is a moot point, but go with it.

“Galloping Ghost” is like every rock n roll fantasy you ever had, “Rock Yo Self (Until You Wreck Yourself)” kind of demands you drive fast, live dangerous and leave a beautiful corpse, and “Furiosa” thinks “Johnny B Goode” got it wrong and should be very, very naughty.

“You Ain’t Shit (Without A Leather Jacket)” makes me want to go around to the bloke I gave mine to 15 years ago and smash his door down and steal it. I don’t even need to, he’s a really good mate of mine, but it’s just that type of album.

One band I haven’t mentioned yet is Nashville Pussy. Partly because I hate cliches but also because the comparison is too obvious. TSF even share a producer with the Pussy boys and girls in Daniel Rey, and “No” is so full of attitude they ain’t hanging around waiting for anyone’s approval.

“Human Animal Bitch” features someone who wants to take Peach on. Yeah, sound. They are braver than me, that’s for sure, but “Dawn Of The Deaf” contains the line you want on your gravestone. “I’m damn wrong, and I don’t wanna live right.”

It’s taken me 500 words to get to the point, but we live in a world where the Dead Kennedy’s support Republicans (not Jello, in fairness) given their tweets this week. Real punk rock is here and what’s more, it sounds as dangerous as a two year old with a chainsaw.

If I’d reviewed this last year, it might well have been my album of the year along with Silver Sun. As it is, just revel in its genius and watch it blow.