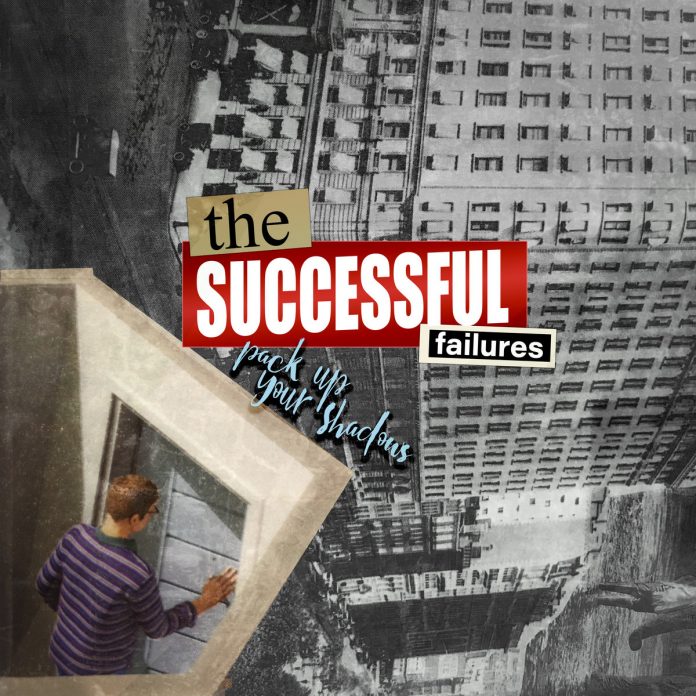 The Successful Failures website is a sad memorial to the times.

When this record arrived – no point in lying about it, this is their eighth record but I wasn’t aware of them before – I immediately understood it was extremely good, so had a quick look to see what the score was.

On the 14th March (which co-incidentally was  the last day I went to a gig, which is why it caught my eye) there is a simple two line entry that says: “The Beer Tour Rolls On, Looking forward to revisiting Tindall Road Brewery on Sat. 3/14/20 – SF Originals Plus Our Favorite [sic] Pogues and Irish Traditional.

By the 20th it says: “SF Not to Appear Tonight (3/13/20) in Towson, MD – Other Weekend Shows Still On”. Before, in a couple of entries times, simply:” In an attempt to keep busy and stay connected [band leader] Mick Chorba has been posting a song a day on Facebook including this cover of Dylan’s Blood on the Tracks‘ classic “Buckets of Rain”. Head over to the SF FB page for more and stay safe!!!”

If ever there was a more stark reminder as to how quickly this all unravelled, then I don’t know where it is.

All that is important for two reasons it seems to me: First, a band like Successful Failures seem to be exactly the type of band that needs to play these gigs in bars and breweries (that much is obvious, whether you have followed the New Jersey band since the start or, like me, for about a fortnight), but second, this horrible situation is exactly the spark that created the wonderful “Pack Up Your Shadows.”

It was meant to be an EP, but creative types, once they start creating, they don’t stop, and the result is these nine songs.

Mick explains in the material the label sent with the release: “It’s how I always wanted to make an album.  Just show up at the studio with a rudimentary knowledge of the material and work through it together, get it done in a few weeks.”

And listen to the last thing here, a genuinely heart-warming rock n roll cover of Hank Williams “My Buckets Got A Hole In It” and tell me it doesn’t sound like the most fun anything has ever sounded. Several times Chorba can be heard saying things like “one more time, a little louder” as if you’ve wandered in on the band rehearsing.

That type of laid-back warmth is all over everything else in different ways, “Honeycomb” is Americana, acoustic and gorgeous, “the Whippoorwill’s hum” immediately puts you in the countryside (and if I only know what a Whippoorwill is because of Blackberry Smoke having an album named after the bird, that’s cool, right?)

By all accounts the band have been flirting with a more country angle on recent records, here they take the leap. “On Down The Line” has very much the taste of MV faves I See Hawks In LA. That is to say that it walks its own path, but is happy next to the dirt roads in the heartland.

But “…Shadows” doesn’t stick to one formula either. Who doesn’t love a good murder ballad? No one and Nick Cave might enjoy the way “Murder ‘Neath The Silver Moon” lurks about, and anyone who has ever loved rock n roll will find something in “This Girl”. If The Replacements ever jammed with Jason And The Scorchers, first of all, I’d like to see it, second, they’d probably turn up with something like this.

“How Many Words” changes the tone. Blues guitar licks waft on by, over something that is strangely timeless. This could have come out at any time since the 50s and not been out of place, and that feeling I had that this is a band that belongs in the bars of New Jersey – the ones that unless Springsteen has lied to me are always full of characters – is predicated on the raucous rock n roll if “More Of The Same”.

“Whiskey Song” is slower, more balladic: “We could sing a song about women, we could sing it all night long” goes its first line, and from there they set about forgetting their troubles, over some evocative Lap Steel and “Something Good” is reminiscent of Steve Earle’s early, more country work. “I don’t see the rainbow, I only see rain” it goes, and yet the happiness with which it is sung is at odds. There is a real contentment here. A desire to make the best of it, if you will.

That is true of the whole record, it is something golden spun out of something bleak. “Pack Up Your Shadows” is almost a promise of brighter days. Now, if you’ll excuse me, I’ve got seven other albums to listen to.