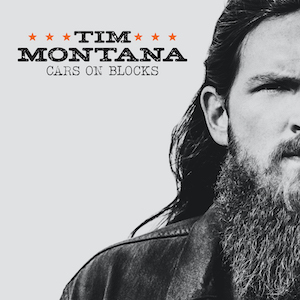 Tim Montana has got some famous mates. Good grief. He mixes with the A list, and when he announced “Cars On Bricks” was coming out, Charlie Sheen was one of a clutch that produced videos of excitement.

Now, I don’t know, but the fact he knows Charlie might mean that Montana knows how to party – and when he sings “the key to hard living is to do it fast” on the opening track –  “Do It Fast” to clarify, he might be speaking from the heart.

What he’s definitely doing here, though, is playing country rock. And I mean that literally too, like its country, but its rock. Not that it is vaguely rock like The Eagles. Nope, if they wanted a floor filler in the clubhouse for the Sons Of Anarchy to get rowdy – it’s this thing, it really is.

But across the four songs, there’s so much going on. “River Kids” is a brilliant segue between “Darkness….” Era Springsteen and Chase Rice at his most rugged (Rice is another one of Montana’s mates), but that’s’ not all.

Nope. Not even by half. “Stronger Than You” merrily has a crack at some proper swampy, campfire blues, and his voice is raw, giving the idea that quite honestly, this could go any way it wanted.

Best of all, though, is the title track. Any song that starts with the line “old uncle Randy, fresh out the clink, couldn’t flush it all down the bathroom sink” gets my vote. Proudly redneck, proudly trailer trash, and the theme tune that My Name Is Earl never had, it is wonderful.

“Cars On Blocks” as a whole is, actually. Clever, funny, superbly crafted and played. And the very last line nails it: “If you don’t like it, you can kiss my ass, and that’s just the way it is.”