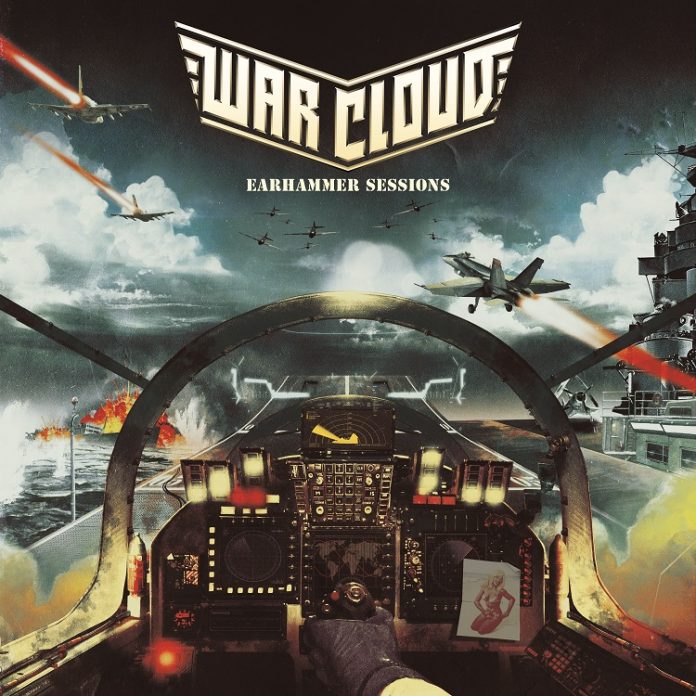 Years ago, Bruce Dickinson (in the period when he was fronting Skunkworks, not Maiden) released an album called “Alive In Studio A”. A live album, but not – to paraphrase 80s US comedies – before a live audience.

“The Earhammer Sessions” is the same. Essentially, War Cloud went to a studio in Oakland and had a thrash about for half an hour.

The reasons for this are unclear, except that as far as I can tell, main man Alex Wein has decamped to Austin Texas, in 2020, so maybe this was a goodbye to California. I can’t say I especially care, I was too busy enjoying it.

I reviewed their 2017 Self titled record (I didn’t do the one in 2019 and I have no idea why) on these pages and wrote this at one point: “This is high octane and absolutely superb stuff. If Peter Pan Speedrock had got together with Thin Lizzy to jam on some NWOBHM tunes, then the chances are it would have been fun first and foremost, but moreover it would have most probably sounded like this.”

I am tempted to leave those words there and leave it, but somehow this new line up manages to sound even more raw. This is the type of record that you are going to know whether you like in about 30 seconds. “Vulture City” comes in like early metal in 1980, before Wein – who sounds rather like he’s singing with ball-bearings in his mouth – intones “living in Vulture City” and you are either ready to proclaim new heroes. Or you’re wrong. It’s that simple.

No breaks at all so this is all the energy you can handle. “Give’r” is somewhere beyond fun and banned in 30 countries, “Chopper Wired” even manages to end with a drum solo and not be crap, and come on, that takes some doing, so well done Joaquin Ridgell. Nick Burks plays guitar rather marvellously and there is a sense that they’ve all rather enjoyed this.

The aforementioned Bruce Dickinson was, of course, only the second vocalist Maiden had on record. The first one, Paul Di’anno brought a kind of punk edge and that’s all over “White Lightning” here, “Divide And Conquer” builds like a majestic beast and you do wonder if there are any riffs left for anyone else.

There is, I suppose, an element of being a pick n mix of metal here. By that I mean that the instrumental “Tomahawk” is simultaneously the fastest and the most crushing thing, and they follow it up with “Speed Demon” which sounds like you’d imagine it to sound – so like Motorhead changing the oil at a Hells Angels garage.  As if to emphasise the buffet nature of the sounds “Striker” does the trad metal denim and leather thing of the Canadian band with the same name.

However, I’d argue that this lack of focus was a strength, too. This is just a band that loves playing metal. You can have an argument, if you so desire as to whether this is essential listening or not too. But that would be to miss the point. “The Earhammer Sessions” is the sound of a band doing something they just wanted to, and anyway, in the lockdown age it might well be the future, and a damn site more fun than sitting on a laptop watching a gig on Facebook, in my view.