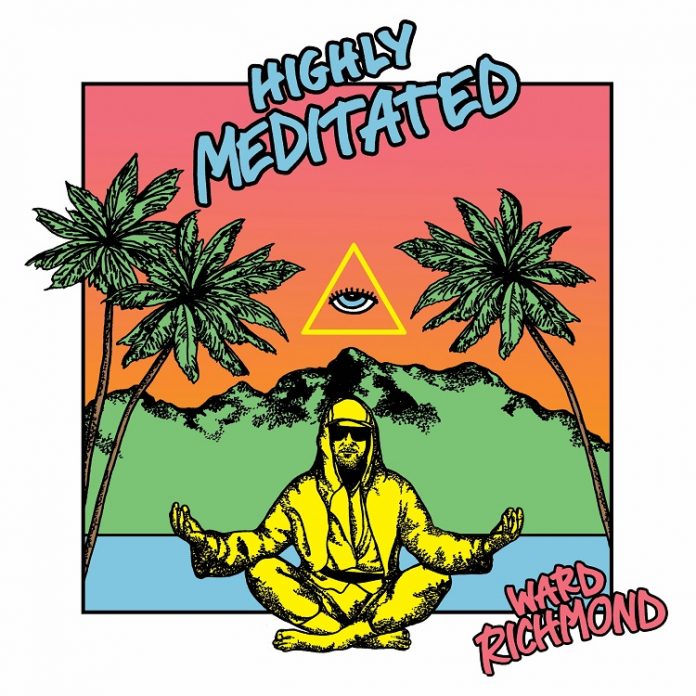 Ward Richmond is 41 years old. That makes him three years younger than me. And yet, there is so much I can learn from him, it seems.

Look at the first line on “Everything” the first “Highly Meditated”: “I’m thinking about quitting everything”.  Then he announces that “I don’t give a fuck about anything” – all before the hook has kicked in.

That’s the sort of thing that can elevate someone to hero status around here, and no mistake.

The song itself – and this is the key to all of this actually – is light, airy, and shot through with a summer-like carefree air that seems to permeate the whole thing. This is genuinely uplifting, which is odd considering the second track here, “In Europe” begins thus: “Miller Light and self-doubt got me this far”.

To backtrack, then. Who is this lyrical genius that is somewhere between Spin Doctors, Presidents Of United States Of America and Tom Petty? Well, Ward Richmond has been in many Texas bands. Amongst the artists he’s opened for are ZZ Top and Ludicris (one of these outfits apparently didn’t survive what is described as a “disastrous” slot at one of his gigs), and “Highly Meditated” are Richmond’s reflections on fatherhood, getting sober, being on the road. And yoga. Lots of yoga.

I am acutely aware that the collection of bands that I have mentioned above make for strange bedfellows. And I’m even more certain that they shouldn’t work, but I would imagine it was impossible to listen to “…..Meditated” without smiling.

There was another reason for mentioning PUSA too. Not least I love them, but not quite for that. See, I have no interest in the deliberately wacky, the self-styled “character”, the type of arsehole who refers to themselves as a “joker”, but those who just naturally think differently. Those who spot the beauty in the idea that, if you will “peaches come from a can, they were put there by a man”.

“High Road”, comes from that same place. Chunky pop riffs a bit like Weezer, this is as catchy as you can get, considering it starts with him quitting smoking this is quite a feat.

The slide guitar of “Tina Louise” is pure southern rock, it’s so 90s sounding that the line “every single song I know ain’t got a single clue about you” takes me back to 6th form and a girl called Helen. Not Tina, she came later…..

“Shootin’ For The Stars” is actually a pretty conventional singer/songwriter affair, but it seeks the silver lining, while “Live Oak” plays with the formula to do something pretty funky, and if the name I keep recalling here is Beck, then its more Odelay than anything else, that’s for sure.

There is just a feel on this record that it is slightly – but wonderfully – out of step with everything else. Not deliberately, just because is, “Smile” sounds content, calm, while “Hey Levi” is a gorgeous song about his son, and you can’t help but warm to it, kind of country, what follows “Birds, Trees, Etc” is back to the rock n roll but it’s the rock n roll of bands like Cake (who I saw support Counting Crows about 20 years ago, haven’t thought of for a decade, but couldn’t stop recalling while this played), while “These Days” makes it clear. A timeless piano tinkle, of the sort that’s been going since The King invented rock n roll, but its about the new found zen. The Yoga that seems to have infused this whole thing.

Richmond has had to overcome a lot – not least a terrible illness to his little niece – but he’s turned it into a massive positive. “Highly Meditated” is brilliant, and totally unlike anything I’ve heard in years.

An unexpected little gem. This won’t be for everyone, but if you “get it”, so to speak, you will be grinning like an idiot for 37 minutes – and rethinking your life choices.