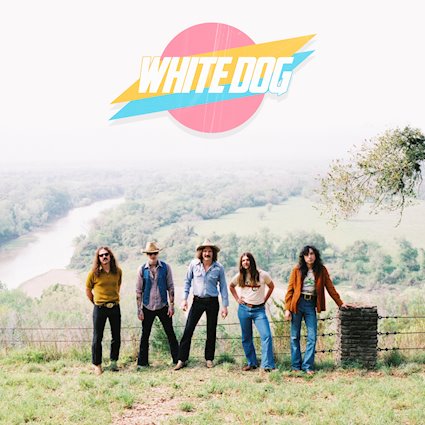 Austin, Texas has a lot to be proud about.  From legendary musicians, from which White Dog take their cue, such as Stevie Ray Vaughan, Roky Erickson, Janis Joplin and The Fabulous Thunderbirds through to comedy icon Bill Hicks, former president Lyndon B Johnson and film director Terrence Malick it is a city that encompasses legendary artists in all the creative endeavours.  It is from this place that comes forth White Dog.

They have been a going concern since 2015 when they started out in a town called San Marcos, Texas.   Like any self-respecting band from Texas their ideas and inspirations were drawn from long days and longer nights of bongs, beers and jamming.

This long awaited debut kicks off in stunning fashion with the rolling schizophrenic stamp of “Sawtooth” which goes through a number of twists and turns in its five minute run time all held together by a tight rhythm section comprised of drummer John Amoss and bassist Rex Pape.  The band is completed and complimented with guitarist Carl Amoss, co-guitarist Clemente De Hoyos and frontman Joe Sterling.

“Black Powder” is a track that you know is going to be great just from the first few seconds.  In this case its a simple but evocative rolling riff that switches into a classic rock sound that would have graced many a turntable in the late 1960’s or early 1970’s.  If the 13th Floor Elevators were around today and half a century younger, this may well be their opening salvo.

The guitar play on “Snapdragon” recalls some of The Allman Brothers finest moments colliding with The Doors.  If you think that sounds too good to be true then I am pleased to inform you that White Dog are the band for you.

This is an album that could easily have been made fifty years ago.  No modern electronic wizardry in production just five guys, each with a drive and determination to make some of the finest classic southern psychedelic rock music you have heard since those 1970’s halcyon days. Nothing on this album is for show, this is the sound of a band who know exactly what they are, exactly what they are doing and exactly where they are going.  This album is a victory for authenticity and originality even when leaning heavily on those inspirational forefathers.

Tracks like “Lanterns”, “Crystal Panther” and album closer “Versus Cultus” feel like they could go on for hours without repeating themselves., almost as if they were works in progress as they were being recorded.  Likewise “Abandon Ship” is a thick slab of energy and intensity that highlights the bands chemistry and quality.

Now that Covid-19 has thrown an industrial size spanner in the works of getting out onto stages to promote the album the band are instead forging ahead with album number two so by the time this pandemic is somewhere like under some semblance of control then the band could well be hitting the road with two albums to promote.

If everything stays in place then this is a band that could enjoy a very long and successful career and join the ranks of the aforementioned Texan legends.

White Dog is out on 25th September 2020 through Rise Above Records.