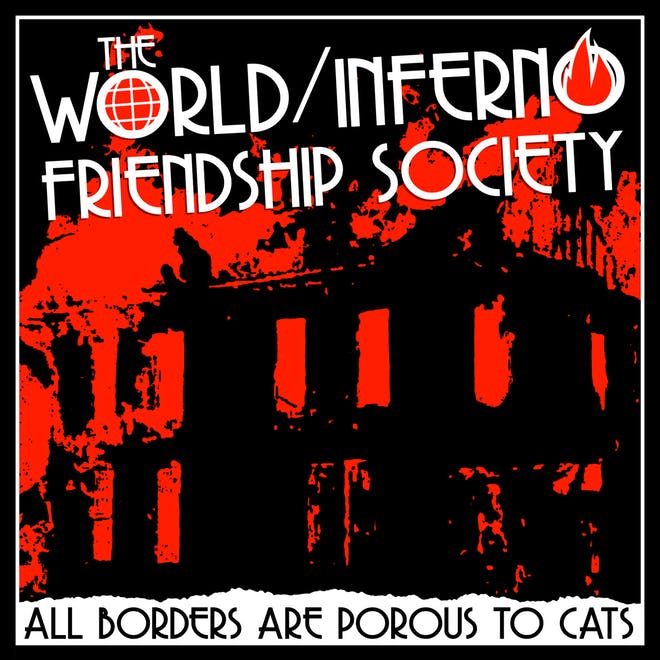 Preparing to write this, I sat here, staring blankly at the screen, with the words: “it defies description” going around and around my head.

The problem is that is not only a kop out of epic proportions, it is also a terrible thing. It is sort of in the contract that when people send me records, they expect me to, well, describe them.

The problem is that “All Borders Are Porous To Cats” is as mad as its title, it’s as bonkers as you can imagine and every single style of music that you can possibly conceive of is contained within its 29 minutes.

The only way I can put it is thus: I once was at an Urban Voodoo Machine gig where singer Paul-Ronney Angel drank his own sweat out of the skull cap he’d been wearing.

The World/Inferno Friendship Society don’t think that’s enough. They take this as a starting point and run with it.

To try and make sense of this is a fools errand. That said it is – apparently a concept record about a refugee The Cat In The Hat. The album follows CIH, an undocumented refugee who is framed for a crime and requires the assistance of a ragtag gang of miscreants, academics, orchestra-calibre musicians, and radical insurgents.

Sorted? Good. I’ll be asking questions later and you can help me out.

Here’s about the only thing I know about these 11 songs. They are all catchy as all hell. “Bad Penny Blue” sounds like one of those big musical numbers they used to have on The Simpsons years back, and “Citizen Of Jazz” sees Jack Terricloth (I am guessing this is an alias, and he’s probably on the run, bless him) one step away from wearing a roll-neck jumper and saying “nice” in a smouldering look to the camera.

The problem is that you can sing along with this. All of this.

“Having A Double Life Is Hard (But Something You Obviously Enjoy)” is glorious and sounds like something you should be playing in the circus, but then once the intro to “The Cat In The Hat Has The Right to Sing The Blues” kicks in, I was convinced that Elton John’s “I’m Still Standing” was going to start. Then it got to the hook and it was like some Oompah band at a German Market playing for change.

Then there’s “Three Parts WTF” and you are tempted to say “you aren’t kidding” but the piano, y’see, is pure Chas and Dave. And the band – of which there’s loads and the “Former Members” section on Wiki is the biggest I’ve ever seen – are clearly incredibly talented. You have to be to pull this off.

“I’ll Be Your Alibi” is wonderful, like a lounge version of The Rolling Stones, but best of all is the sort of punk of “Looks Like Blood Put Is Probably Wine”, it sounds like nothing and everything all at once, while “All I Can Do To Help You With Your Nightmares Is Keep You Up Late” is not only a brilliant riddle, it is also a move into ska.

One of those collections where you actually feel stupid as you reach for comparisons that no one will agree with, “The Roosters Are Coming Home To Crow” is actually country pop tinged, and is another shining gem, but if what you wanted here was a metal riff and some soul backing vocals and enough violin to make Ferocious Dog blush, then “Freedom Is A Wilderness Made For You And Me” has got you covered.

It’s at this point you wonder if you should listen to it again to get the nuance of the plot or to hear what you missed the previous five times and you think, actually forget all that.

Here’s the only thing that truly matters. “All Borders Are Porous To Cats” is brilliant. You won’t have a clue why, you won’t be able to analyse it anymore than you can nail water to a wall, but if you disappear down this particular rabbit hole, you might well be humming this for days.

This is utterly bonkers, but it’ll end up being one of the records of this year.