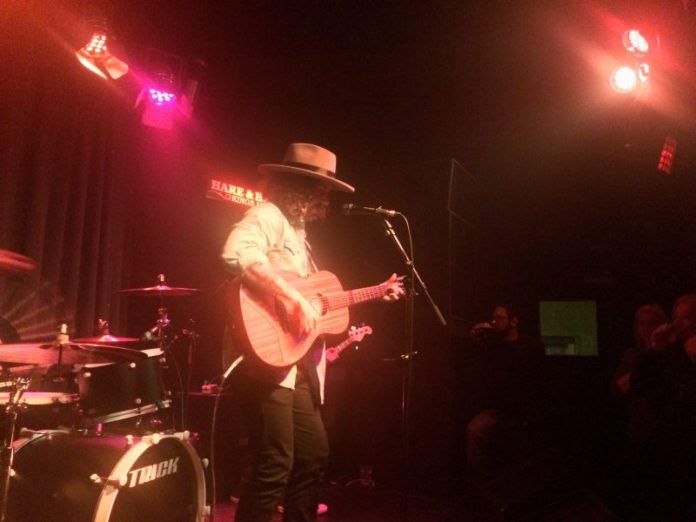 On the face of it, doing an acoustic tour when you’ve just released an album that isn’t stripped down in any way doesn’t make a lot of sense. Or at least it doesn’t until Ryan Hamilton explains the rationale behind this band.

The Traitors, as he points out, are free from the personal bullshit that dogged Smile Smile – the American chart botherers with which he cut his teeth – and they are very much relieved of the business side of the music business that saw him leave People On Vacation, the wonderful outfit he was in with Bowling For Soup’s Jeret Riddick.

Rather, now he’s his own boss, he releases albums in a similar manner to his friend Ginger Wildheart, and if he wants to do an acoustic tour, then he’ll do one, dammit.

The format suits him perfectly too. Laid back, funny and warm, Hamilton mixes songs from his two solo records with some stories which by turns are funny (hearing the C word being casually used on his first trip to the UK), and personal (the break-up of Smile Smile, and his battle with online bullies which so informs his work now), but all done in such a way that nothing is forced and all is completely natural.

Starting with a new version of “Smarter”, the first track on the new “Devil’s In The Detail” record, and doing the same across swathes of his back catalogue, really brings home just what a magnificent songwriter Hamilton is, but also the country influence in his work that isn’t always immediately noticeable.

Many of the songs have a fresh side brought out by the band playing them this way. “Records And Needles” is turned into a laid back Stones-y thing, while “Never Should Have Moved To LA” shines brightly. Elsewhere “Medicine” is catchy as you like, “Oh My God” is a cheeky stomp and “Scottish Mud” is an ode to a country that Hamilton loves.

The anti-bullying anthems “Freak Flag” and “Ode To The Idiots” – the latter a country punker that Jason Ringenberg might kill for – are here too as is some interaction with the audience (we find out for example that one works in a bank, while another doesn’t want his wife to know he’s here, ironically, perhaps, before “Cheaters Never Change”….)

It’s that kind of night. And the kind of evening too that sees Hamilton’s mother – who is in the crowd – disapprove of the language. Like his albums. this is a warm, uplifting and empowering evening and right before he plays the beautiful ballad “Heavy Heart” he confides that the track has been picked up by many of the big radio stations and looks set to give him a hit.

It is worth, perhaps, considering this – and as the show has been so open it seems right to share. The last time MV was in this room it was to see The Temperance Movement. Six months later they had a top 20 album and a less than a year after that they were selling out 2000 seat venues a few miles away in the City Centre. Don’t bet against the same happening to Ryan Hamilton and The Traitors. If it does though, you can bet it will only be on their terms. And if it does it won’t happen to a more genuine or deserving  bunch.