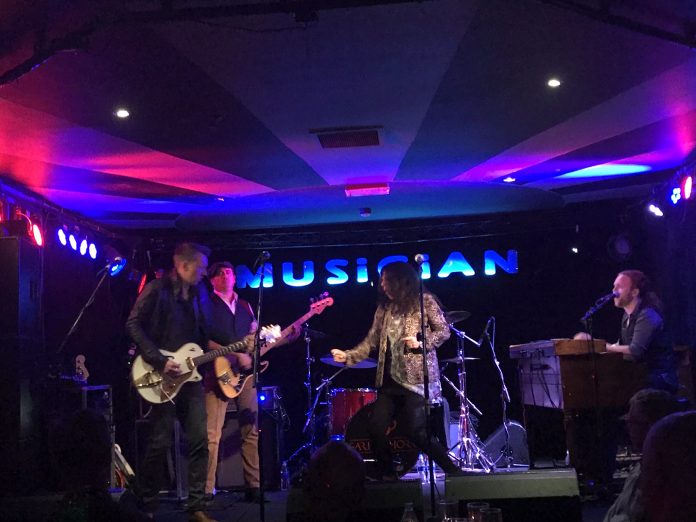 “I’ve vetted you especially. I know all about you.”

That’s a chilling thought, but luckily Sari Schorr is joking (I think!). However, like all the best jokes it is rooted in truth. Tonight, you see, we are in for a world first.

Sari Schorr is a few weeks away from releasing her second album, and we are in for a sneak peak. Actually, I’ve heard it, so I know “Never Say Never” is incredible. It might be better than her aptly named debut “Force Of Nature”, which seems odd to say given how much I loved that record (we’ll save that for the album review….) but now the rest of the crowd in the intimate setting – there are candles on the tables, and I imagine this is how it feels to watch a gig in one of those little bars in New Orleans – must surely be excited too.

And although she’s too modest to say it herself, New York’s finest singer (that’s not hyperbole either, find me one better) knows it. Happily starting with “The New Revolution” from the new one, the set is roughly half and half of new and old.

The old, though, is interesting. Maybe it’s the confidence, the way things evolve on a long tour, or a new band, but these versions of the “….Nature” material are different to before. She attacks “Damn The Reason” here, as if life depends on it.

The new musicians too – and this is not meant to disrespect the old Engine Room – have breathed new life into this. Bob Fridzema is as good a organ player as there is (and on “Ain’t Got No Money” he’s in exceptional form), Ash Wilson makes lead look almost effortless, while Mat Beable – who I last saw with Stevie Nimmo – and Roy Martin are a mighty rhythm section.

All that enables Schorr to do her thing, knowing that the band can do anything she wants. “King Of N Roll” the albums lead track, and “Thank You” – and woe betide whoever that’s about – are destined to be in her sets for years.

As well as being a fine songwriter, Schorr is a wonderful interpreter of songs. She could make reading the tv listings sound sultry, so “Ready For Love” by Bad Company is no problem, while it takes some doing to provide something fresh on “I Just Want To Make Love To You”, she does, though.

There’s a clutch of new ones after this “Maybe I’m Fooling” has a vibe similar to Fridzema’s former employers, King King, “Valentina” stomps like a proper rocker – and you just know Schorr wants to be a rock chick too – but she’s blessed with a voice that can bring out the emotion of the title track perfectly.

There’s something charming too about the way she is relaxed enough to change the setlist round so that “Freedom” puts an appearance in, and not having an encore is always good for bonus points. The song she plays last, “Aunt Hazel” deals with addiction, but there’s something about Sari, that can’t resist the playful. There’s a line in the song that goes: “I’m in trouble again…..” and, as she sings it,  she fixes us with a look that is worth a thousand words.

This is a set with everything. Raw emotion, songs that few can match and incredible talent everywhere you look.  It is a genuine thrill to have been there at the very start of what will be an amazing new journey.