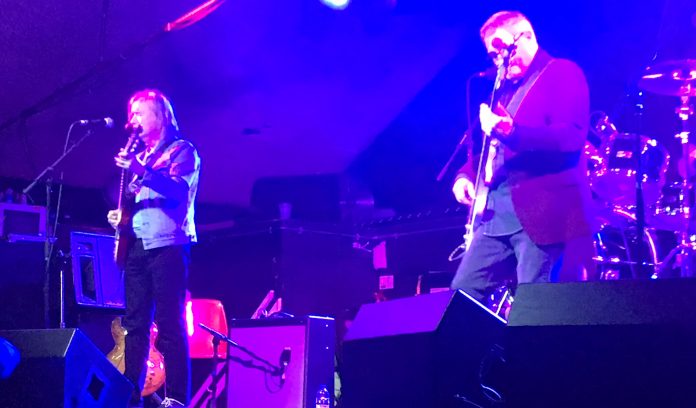 It is odd, perhaps, that it is often the case with the blues that the artist is defined by a cover.

So it is here.

Kim Simmonds – who has piloted Savoy Brown for 50 odd years – plays a wonderful set here and has had a wonderful career (it’s still going on too – the last album he put out “Witchy Feeling” reached number one in the US Blues charts), but somehow, when he rips through a brilliant version of “I’ll Keep On Singing The Blues” by Memphis Slim, it is when he looks truly at ease.

For one thing, the song is brilliant, and Simmons’ guitar playing, which had seemed top-notch all night, seems to go up a further notch here – not to mention the harmonica lick too.

But it’s a little more.

When he tells the story about why he plays the track, you can hear in his voice just how important this music has been to him for 60 years.

That’s what gives this evening a warmth, a reverence, if you like. It’s not raucous like some would be, but what it actually becomes is a celebration of Blues Music.

The set is “front loaded” as Simmonds puts it, with newer material. Which means that one of “….Felling’s” stellar tracks “Why Did You Hoodoo Me?” starts things off, and the brand new “Waling On Hot Stones” and “Payback Time” are close behind.

It’s an interesting way of going about things, and one which underlines in bold – in all senses of the word “bold” – just how much confidence he has in the new material. It’s well-founded too.

There’s plenty of room for older stuff too. “Poor Girl” and “Needle And Spoon”, with its Cream-isms  prove just how timeless this music remains, and just how lovingly this is played.

Pat DeSalvo on bass and Garnet Grimm on drums play their part too, and there is a real band feel here, they both cut loose on their solos, and things reach the appropriate crescendo with “Tell Mama” – with Simmonds recounting the story of how got his first guitar as a 13-year old and he clearly still has the desire and drive for his craft.

“Savoy Brown Boogie” is not only appropriately named, but it concludes an evening of a rare gentleness. There are times when this feels more like a trio who are playing a gig for some friends rather than a proper tour – and that is to its massive credit.