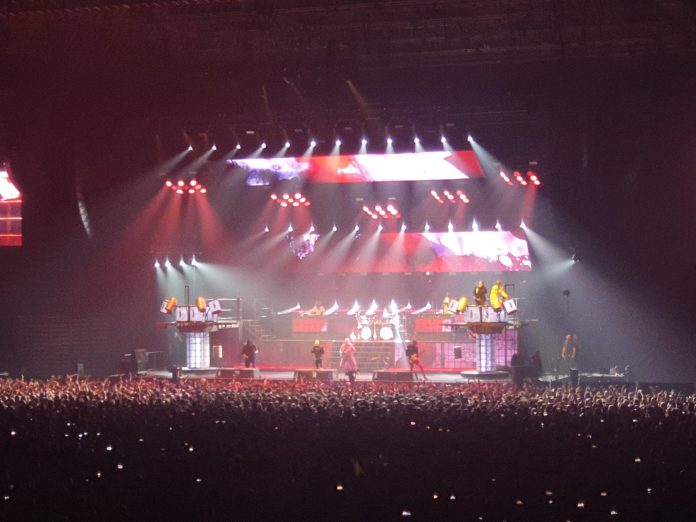 When the bill for this was announced, I confess to a slight: “that’s an odd pairing” thought. But that rather neglects the similarities between the bands, the anger, the hatred, the nihilism. In Behemoth’s case, of course all of that bile is directed to religion, and if anyone was going to be able to bring extreme metal into arenas, then it is Nergal and the boys. And, whatever else you can say about them, then you absolutely cannot say that they don’t put on a show. Genuine headliners in their own right, the Poles, for 45 minutes do their thing, which is quite unlike anyone else. They might be in their fourth decade now, but this is a band with little time for the past. Rather the set concentrates on their new stuff. “I Love You At Your Darkest” – the one from a couple of years back – gives the opening “Wolves Ov Siberia” while “Ov Fire And The Void” is particularly impressive. Lurking deep within their shadows, even here, as the flames of hell burn alongside them, they may be too much of a leap for some here, but as the four play the percussion at the end, on “Chant for Eschaton 2000” there is little doubt that first some have been won over and second, Behemoth belong. 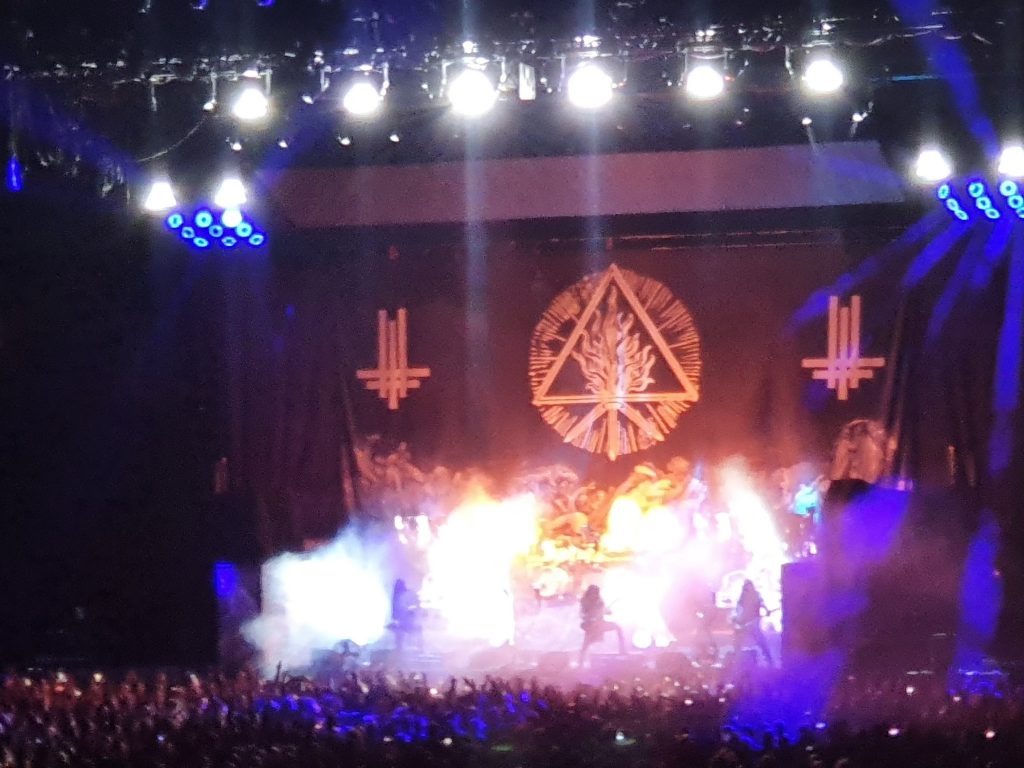 On the 24th January 1989, I read today, Skid Row’s first album was released. A seminal piece of sleaze rock, the band were the first I ever saw live, just over 28 years ago.

That might seem a strange thing to start a Slipknot review with, except for this. In one of his many discussions with the crowd, the inimitable Corey Taylor says: “We’ve been coming to your town for over 20 years. Some of you weren’t even here when we first came through…..”

And that set me thinking about a couple of things. First, that to me, Slipknot are one of the “new breed”, and I must be old, but second: the room he says it too, man, its packed. 15.000 people. How did it get to be this? How are Slipknot the biggest extreme metal band in the world?

The answer of course is simple: they have songs that connect. Simple as that. They connect, with whatever raw emotion they need to connect with. In the encore here – about an hour and three quarters after they turned up on stage – Slipknot do “People = Shit” and the place goes crazy. Not your normal crazy either, but a visceral, blunt force kinda mad, one that is primal scream therapy The people here, probably don’t think that people are all bad, but here, they are the maggots, the outsiders and they are empowered.

And also, they are an “extreme” metal band too. Slipknot, they always were. And they never really get enough credit for the originality either. This cacophony of conflicting sounds, the twin percussion, the DJ, whatever, it shouldn’t work. But it does.

But extreme or not, they are an arena band too. Big, brash and colourful. God, they even use “For Those About To Rock” as the intro. It’s that just after, all hell breaks loose, and by and large, it doesn’t stop – except for the rather strange hiatuses that happen three or 4 times where no one is on the stage and there’s just white noise.

Notwithstanding those, there’s “Unsainted” the pick of the new album, there’s oldies “Eyeore” and mid-period stuff like “Psychosocial” and the ever eerie “Vermilion” and this is well balanced between the ones they have to play, and the ones they want to play.

In amongst them are the wonderful “Before I Forget” too. In many ways it sums them up to me. How something that heavy is catchy is beyond me, but it is.

And there’s the band themselves. Energy, power, the man mountain Jim Root, and the feeling that it could all unravel at a moment’s notice – it does at one point – and blood is spilt, somewhere, somehow.

At the centre of it all is Corey Taylor. The ringmaster? No, too simplistic. The Firestarter, more like it. He launches into an impassioned anti-racism speech before “All Out Life” and then sings “Duality” to close the set. All with exactly the same intensity he ever had.

The encore, as well as the aforementioned “….Shit” has “(Sic)” and “Surfacing” in it, and before the latter Taylor screams: “are you ready for your national anthem…..” and that holds the key. He refers to the band and the fans as “family” more than once, and it is clear that for some (many?) here, this is not “just” a metal band, not just songs. Slipknot are, it seems to me, a way of life.

Put that all together with what are some fabulous songs, and even after 20 odd years, they are just getting started.