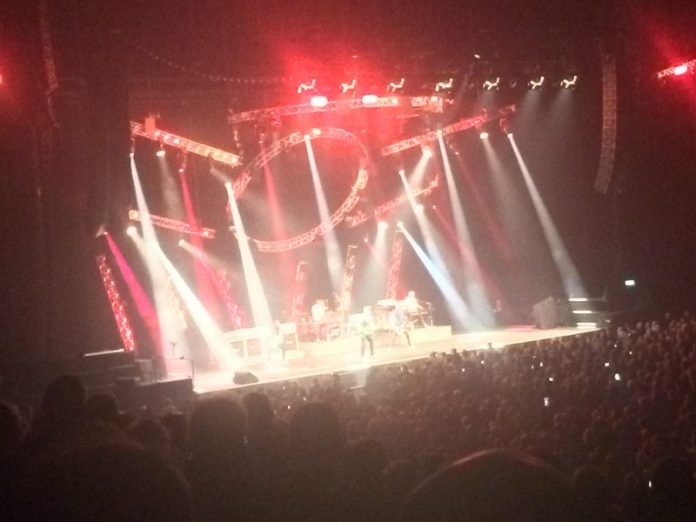 Quo say goodbye to the Electrics  as only they can

R.E.O Speedwagon singer Kevin Cronin has a cunning plan. He’s just sung the opening verse of “War Pigs” and that has given him an idea. “I dunno, Birmingham,” he says. “What with Quo finishing with the electric shows, and Sabbath playing their last ever gigs in February next year, maybe you are looking for a new, younger band to replace them……?” If you are looking for classic rock then to be fair you do a lot worse than look right here, because for the hour they are on tonight Speedwagon deliver a set choc full of it. The mega hits are here, “Take It On The Run” is tossed in early like it isn’t a big deal – it is.  “Can’t Fight This Feeling” is like the power ballad’s power ballad and “Keep On Loving You” even outdoes that. Oddly, though the best songs are the ones that perhaps didn’t make the headlines. “Son Of A Poor Man” – billed here as a “Chicago Shuffle” is actually rock n roll at it’s finest, while “Keep Pushin'” is arena rock writ large, and with bass player Bruce Hall taking the mic on a couple of occasions to add a more rasping, harder edged quality to proceedings, this isn’t quite the masterclass in slickness you might have expected. Instead, it is much better than that and becomes almost a “how to” guide on putting a support slot together.

So Quo have taken the final curtain – maybe. That’s what they say anyway and there will be no more electric shows. It would be, probably a good time for this too, given that Rick Parfitt’s health has meant he called time on the band this autumn – his replacement Richie Malone, previously of a Status Quo tribute act, is stellar here, though.

If they are about to call it a day, then they are doing so in fine form and with a set that – give or take a couple of songs like the quirky “Gerdundula” the fun “Creepin’ Up On You” and the oldie “Softer Ride” – which is the same as they have been doing the last few Christmases. One which cements their place as one of the finest rock n roll bands that this island has ever produced.

If ZZ Top are the best little old band from Texas, then Quo are best boogie band we’ve ever had, “Caroline” which opens this, proves that. “The Wanderer” is wonderful, and “Rain” whizzes by, as does the medley they always do and “In The Army Now” is its usual singalong.

Like AC/DC you know what Quo are going to do, but that doesn’t make it any less marvellous when they do it. The last three they play in their main set, “Down, Down”, “Whatever You Want” and “Rockin’ All Over The World” are up there with any trio there is (and yeah, we know the latter is a cover, except even John Fogarty knows Quo own this song.)

So they probably don’t mean it, and they’ll probably be back and amped up again  next year. If they are really hanging up their electrics though, then to be as electric as this was a fitting way to go.