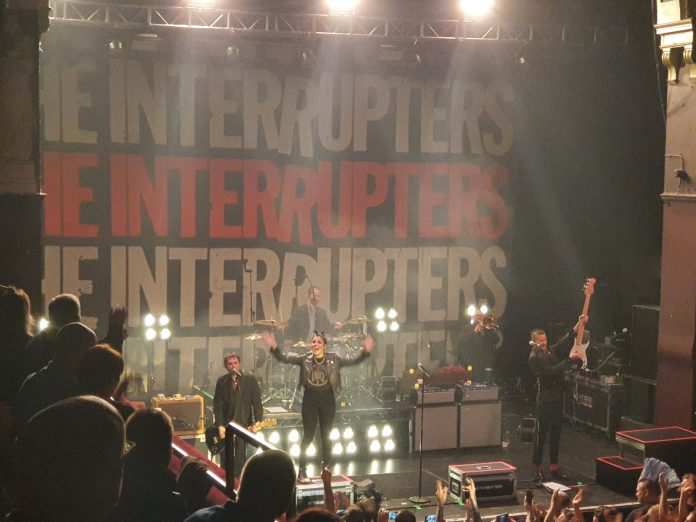 Buster Shuffle. In one word: Fun. Simple as that. The self-described “Piano Bashing Music Makers” play hundreds of shows a year, and the reason is they are damn good. A band that you simply can’t imagine having an off night. Shuffle are riotous here. You can file it under “it shouldn’t really work, but by god it does,” if you like, but “It Doesn’t Really Matter” and “We Fall to Pieces” are part Ska-punk and part Cockney knees up, a la Chas and Dave. Then the next minute, Jet and the chaps are off in some other realm doing The Prodigy’s “Out Of Space”. “Our Night Out” – and you imagine these songs are soundtrack to many, (both other people’s and their own, probably) is glorious, and if I was already onside before “I Don’t Trust A Word You Say” was dedicated to Boris Johnson, then let’s be honest, that essentially sealed the deal. Massive on the continent (sold out shows in Germany are basically a pastime) it is time for Buster Shuffle to bust down some doors here too. They belong in the big venues – and not in front of other people’s gear, but with their name on the poster, right at the top. 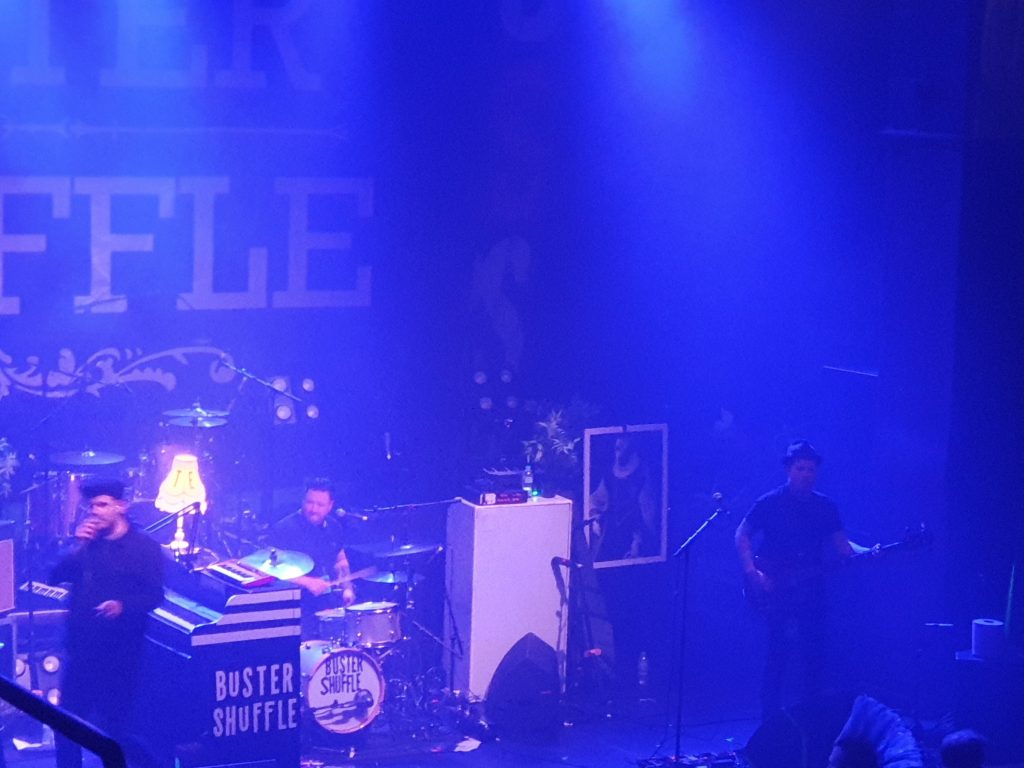 The Skints. In one word. Mellow. It’s cold outside – in fact, it isn’t hot inside either – but as soon as the London based quartet start playing, there are warm, summery vibes all over the place. An interesting mix of styles, musically and personally, Josh Waters Rudge on guitar is ebullient, a dervish, drummer Jamie Kyriakides, seems laid back and sings his harmonies just beautifully, while Marcia Richards does the keys, the gorgeous soul-filled vocal and the flute. It makes for a 45 minutes that is always compelling. From “Restless” through to the cover of Dawn Penn’s “You Don’t Love Me (No, No, No)”, they seem to make everything their own and absolutely in keeping with their sound. “This Town” is hewn from London, “Friends And Business” is a highlight, “Armageddon/Rise Up” are joined together, a little harsher lyrically, but still sweet and blissful. The last one “Learning To Swim” even has a proper electric guitar riff, and Marcia plays that one too. The Skints, as Rudge says more than once, is written on the moon on their backdrop. It seems to be where they are aiming for too. 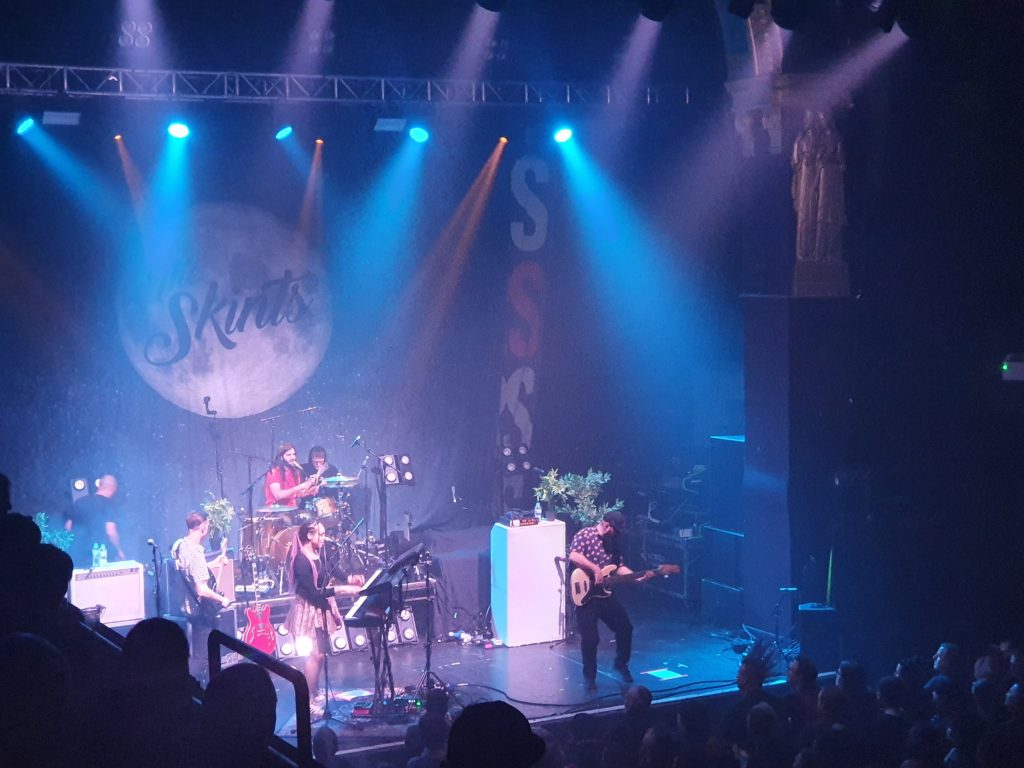 Tonight is, as guitarist Kevin Bivona points out, with due glee, the biggest show they’ve ever played in Birmingham. It won’t be the biggest they ever play, I am prepared to bet money on it. What you are looking at here is the next arena rock band. The quartet, Kevin, his twin brothers, Jesse and Justin, and superb frontwoman, Aimee, are only headed one way.

They know it, too. For all their humbleness on stage, there is the kind of in-built confidence you see from a band who gets that they are on top of their game, from the start of “A Friend Like Me” to the ending “Kerosene”, it doesn’t even matter what they play, really, it just feels like a celebration.

Touring their 2018 album “Fight The Good Fight” still, what they do is rock n roll fun, but in fairness to them, it has a message. Inclusion is the theme of the night, “Take Back The Power” is a protest song, but one that encourages togetherness. The stand out “Title Holder” (heroically catchy, it has to be said) reminds those struggling they aren’t alone, and “Room With A View”, although not a ballad, is more mid-paced and an interesting take on grief.

Whatever they do, though, whether it’s the Billie Ellish cover “Bad Guy” – which sees Billy on trombone excel – the overt punk stylings of “Jenny Drinks” or the ska classic “A Message To You Rudy”, they are met with a rapturous reception.

And, they have a grasp of their audience too, and they are very, very good at it. In “Broken World”, Aimee goes into the crowd to meet her people, and the crowd surfers love it, and it seems “Give You Everything” is taken literally here, as in sporting parlance, they leave it all out there.

They don’t leave the stage, though. Kevin, instead, gives his encore fantasy (and its fair to say more people know the words to “Don’t Look Back In Anger” than they do “Mama, I’m Coming Home”, but whatever) and “The Metro”, which is coloured by their hometown, and particularly “Family” keep it going.

Family is interesting, really. Given that the band literally are three-quarters family, but also there’s a togetherness with the audience that seems more real than many. You hope they don’t lose that when they’ve got 15,000 of their nearest and dearest around instead.