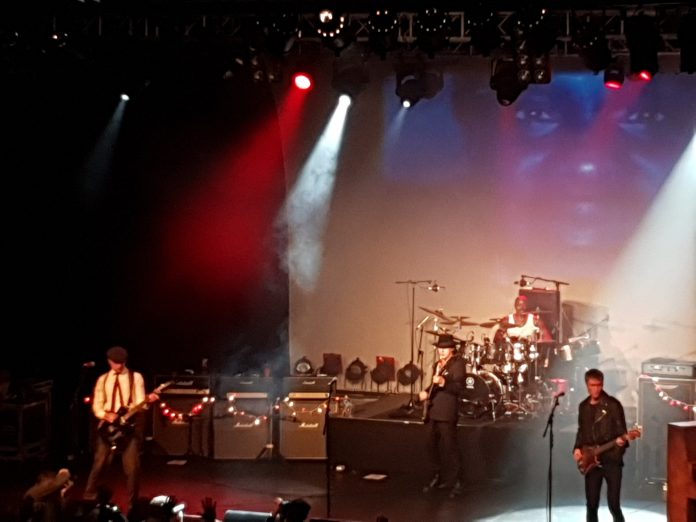 You know when people say the crowd was “up for it” and it becomes a cliché?

Well, here the crowd were up for it.

Chatting to the security people downstairs they all said the same: “Saturday night was mad, man. A football crowd. Tonight’ll be quieter.”

At 9.10pm, a few minutes before the band are due on stage, they send out comedian Paul McCaffery on stage to do a bit. Cards on the table, I know about as much about modern comedy as I do about Astro-physics.

I still haven’t heard one of McCaffery’s jokes. Why? Well, Birmingham just wants The Libertines, not the funny man, so after calling one of the – many – members of the crowd that is abusing him “a virgin” he attempts a story, then with a resigned air he says: “this ain’t happening is it?” and disappears from whence he came. Quieter? God knows what Saturday was like then.

Given the febrile, some might say rabid, atmosphere, you’d usually fear for the support bands. Not here, thankfully. And someone has done a mighty job in picking them.

The first of them, Blackwaters, are a scrappy, scuzzy punky thing from Guildford, in their early 20s and absolutely full of the excitement you’d expect. Singer Max Tanner is better dressed than I would be for a day in court, and his energy is matched by the other three. The songs get by on the same snap, crackle and pop too, and whatever you’d want songs called “Fuck Yeah” and “Let The Good Times Roll” to sound like, is actually exactly what these songs sound like. Off on a Nationwide trek of their own in the New Year, Blackwaters fancy making a splash and you’d best believe it sounds like they are going to wring every ounce of enjoyment out of it. 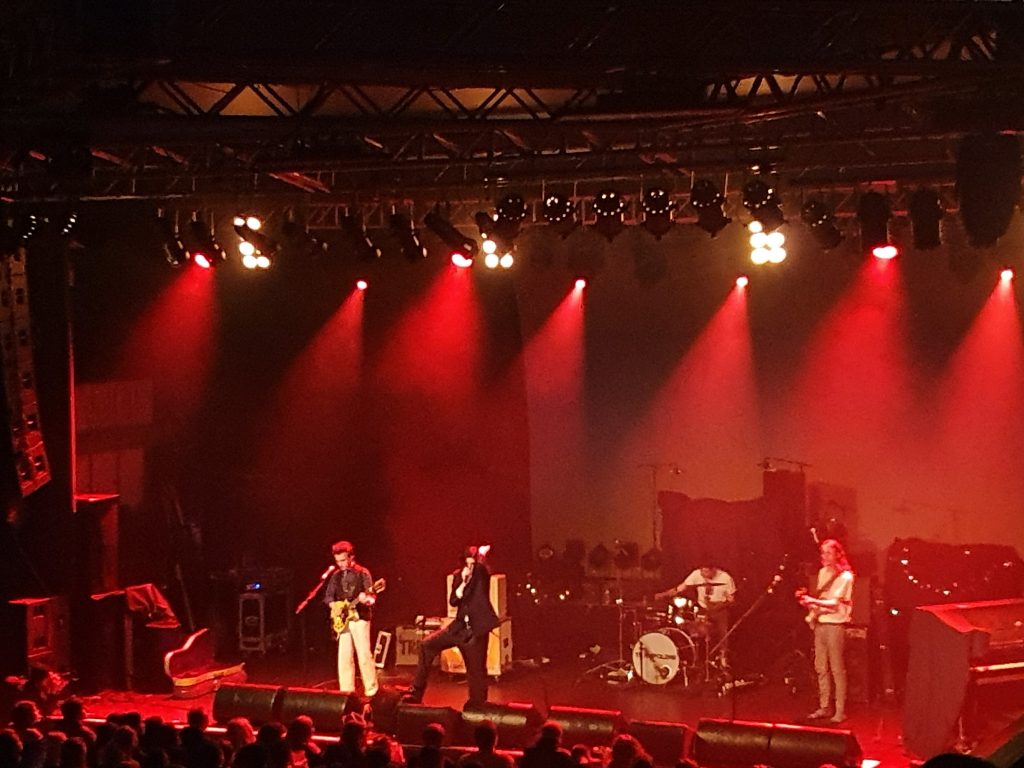 Swansea’s Trampolene are cut from a similar cloth, actually. They are here to play rock n roll, and they’ll take your sex and drugs too, please. The latter is evidenced by the spoken word homage to Ketamine that Jack Jones (their singer and former spoken word artist) recites halfway through. There is something about trio’s. though, that always sounds so well balanced and this one is no different, and “You Do Nothing For Me” is a real knockout. Trampolene are as bouncy as their name indicates elsewhere too, and “Alcohol Kiss” and “Bourgeoise Girl” are the products, surely, of drunken nights of debauchery and youthful exuberance. And good luck to them for that. 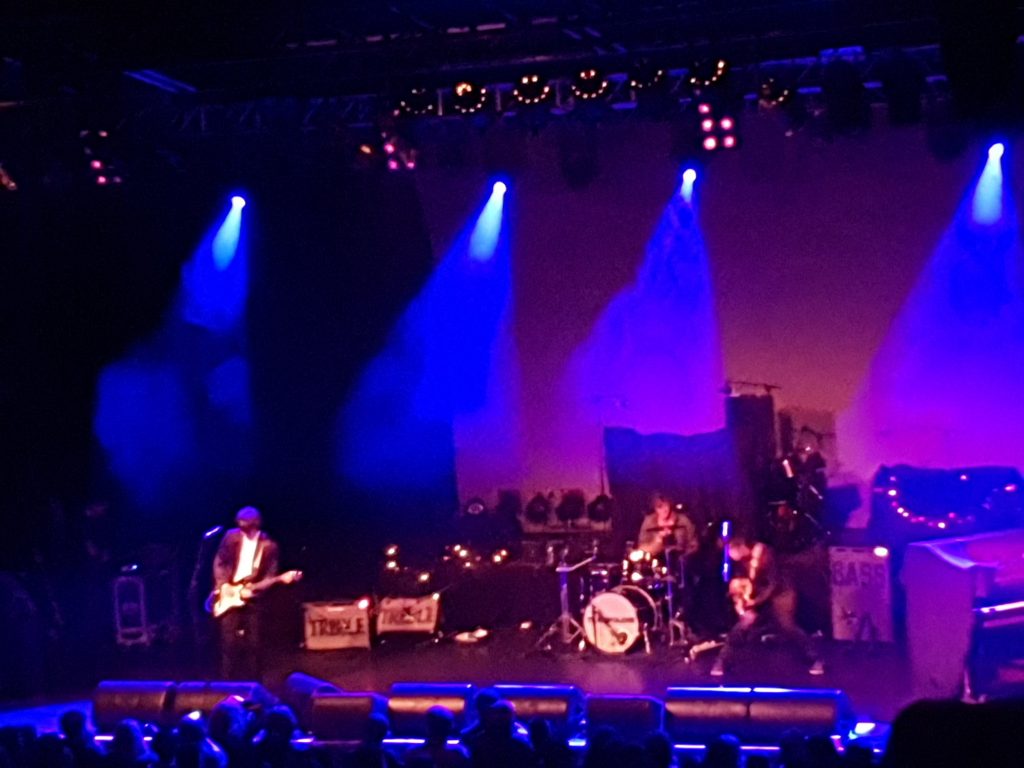 In between both of these, doing a split set is Ed Cosens, the Sheffield man, who to paraphrase Troy McLure from The Simpsons, you might remember from such bands as Reverend And The Makers, plays acoustic tunes from his new album. He fares better than the comedian. Rightly so too, as songs like “If” and “Lovers Blues” provide more than a healthy distraction. 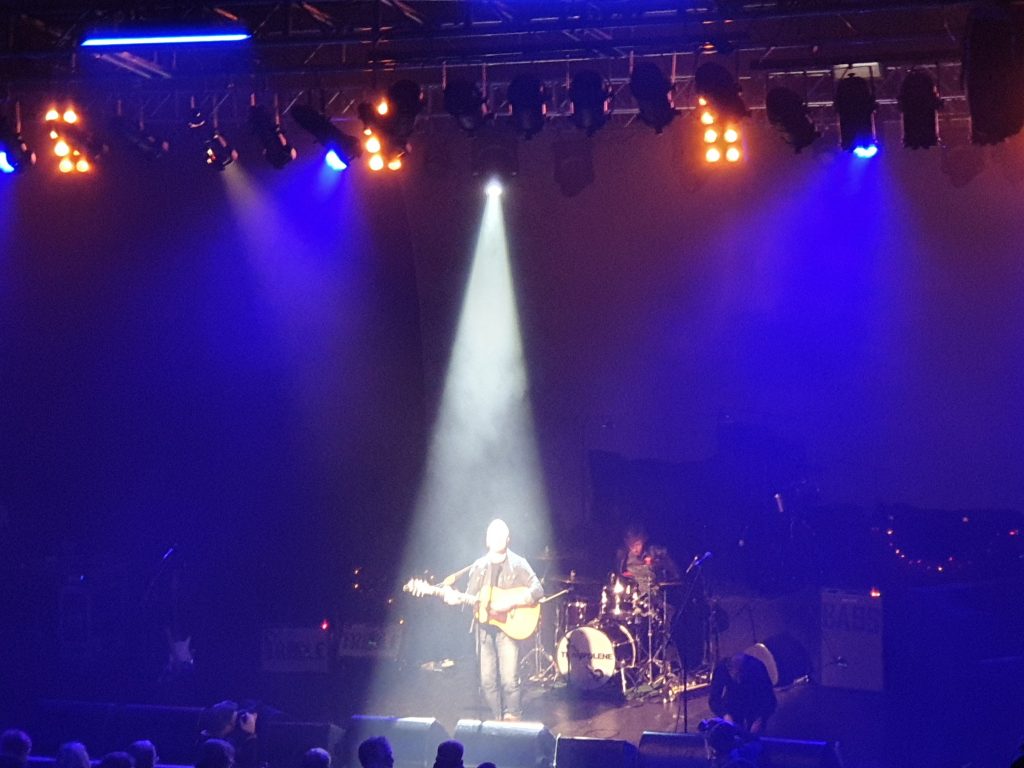 But the distraction is this. The Libertines are back, and from the second they are on stage to the second they leave it 90 minutes later, they have a total command of their craft and a complete hold on their people.

The love for them is astonishing. Never mind the politics of it all, who fell out with who, the drugs, the whatever, if you just focus on this from a purely musical point of view then The Libertines have got it still.

I say “still” because it is 17 years since I’d last seen them. I’d gone to see them either just before or just after (and I can’t remember which) the debut record came out at the old version of The Academy, when they were “our punks” if you like. Similar ages to me, they were going to be the future.

They still resonate with that element, but it is clear that there are many, many kids here who probably weren’t born when “Up The Bracket” was released. That is why this matters, and that is how this music survives.

It starts with “The Delaney”, which if memory serves (?) was a b-side, and credit to them for coming out and not just playing “the hits” as it were. They never struck you as a band who pandered to anyone though.

Songs come and go in a blur. And this – literally – is just about the music. A legacy that is right up there in British rock n roll too, whether it be “Horrorshow”, the first taste of “…Bracket” stuff, “Gunga Din” from the 2015 comeback record or anything inbetween, it is delivered with class, skill and the air too that everything is being held together with a thread that it always had, and a danger it probably needs.

And yet, this is nuanced stuff. Carl Barat at the piano for “Barbarians” or all the band gathered around to sing “Dead For Love”, it has more emotional pull than you’d possibly remember.

But then, the classics, “Boys In The Band”, “Death On The Stairs” or the glorious “What Became Of The Likely Lads” have stood up superbly. And when “Time For Heroes” finishes the set, it does so with a crescendo.

There was, of course always going to be an encore, but honestly, I am not sure the band would have got out of the building had they not done one, they’d been chanting “Shoop shoop, shoop de-lang-a-lang” and are delivered “What Katie Did”, there’s even a drum solo – and you’d best believe that Gary Powell deserves it too, and both band and their faithful deserve “What A Waster” and “Don’t Look Back Into The Sun”. And Lord help the security guards.

As a metaphor, this’ll do. At 9.30 Pete Doherty walked out in shirt, tie, jacket and cloth cap – looking like one of the Peaky Blinders. At 11, he walked off covered in sweat, stripped to the waste, but you know what? Looking like he wouldn’t have been anywhere else.

When it comes to The Libertines, never mind the bollocks, focus on the music, because they were made for nights like this.