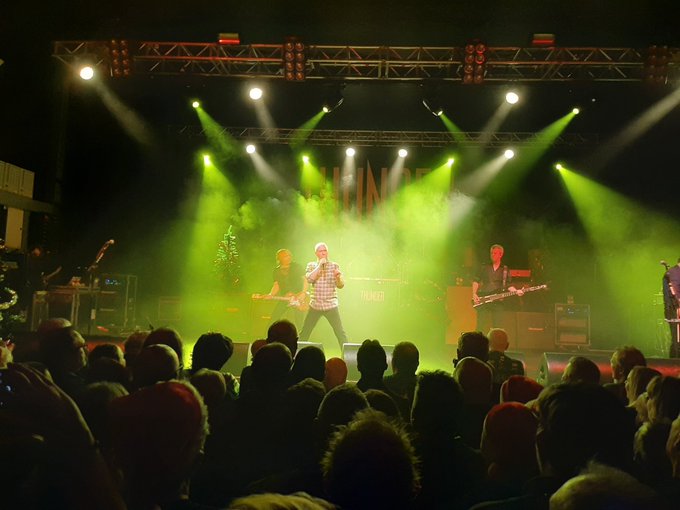 On 15th October 2017, I wrote this after seeing Thunder do a Christmas show at Wolves Civic Hall.

“Thunder have always been – and will always be – one of my all-time favourite bands. Some of the finest gigs I’ve ever seen were in here watching them and watching them will always be a treat and something I’ll always do. Will I come to a Christmas show again? I’ve been to three others before this and that might be enough. Notwithstanding my personal feelings on the season, I just prefer Thunder when they are being Thunder and not filling half their set with the songs of other inferior – in my opinion anyway – bands.

On the 20th October 2019 watching them at Birmingham Academy, I feel exactly the same way.

Why, you ask, did you part with your money and do it again, then?

Well, the answer to that is two-fold. First, it is contained in the phrase: “Thunder are one of my all-time favourite bands”. They really are.

And second, because of that, when they play a show five miles from my house, it seems like a good idea to go.

The format of these things is always the same.

The boys, tonight augmented by Sam Tanner on the keys and as always, the gorgeous voices of the backing singers, Emily Lynn and Lara Smiles have an acoustic run through of a few. This is a little more natural this year, given the “Please Remain Seated” album did some acoustic reworkings of their tunes, and they played a phenomenal gig just up the road in February playing them. “Blown Away”, “Future Train”, “This Town Ain’t Big Enough For The Both Of Us” and – naturally – “Better Man” are all mighty, but my problem comes in the others.

Now, I have already been told I am “out on a limb” here by a mate that I text in a state of dudgeon, and I know I am in a minority of one. Hell, I’ll even accept the argument that this is Thunder’s party and they are playing what they love, but still: I don’t like covers. Never have, never will and they pack these Festive things full of them. I even like the songs they rework – “Magic Bus”? “Won’t Back Down”?” “I’m A Believer”? Who doesn’t like them? But let me tell you what I like more than any of them, shall I? Thunder songs. I wish they’d play more at Christmas, that’s all.

The stools go for the second bit, and they, in the words of Danny Bowes (and he’s still got the best voice in rock n roll along with Steve Overland) “jump up and down a bit”.

What he means is, the electric guitars are out, and goodness me, “She’s So Fine” the opener, has aged like fine wine. It is glorious.

That’s 30 years old, “The Thing I Want”, “Resurrection Day” and a brand new song “Going To Sin City” are all written this decade and all prove – I think, anyway, but then I suppose I would? – my point. Thunder are as good as there is.

So why they play “Gimme Shelter” and “Layla” as well, I don’t know. Don’t get me wrong, they are ace at these too (although no one can save Queen’s “Somebody To Love” – or any Queen song for that matter – from being abysmal, not even these lads) but personally, I just long for the band to play a “proper” set.

It’s a treat to hear “Englishman On Holiday” still, however – and a better put down of “lad” culture you will not find – and “Backstreet Symphony” is right from the top of top draws.

Bowes has a Santa hat on for the encore – and given that it is about a million degrees in the seats, lord help him – and “I Love More Than Rock N Roll” and “Dirty Love” are incredible, genuine gems. “Lady Madonna” by The Beatles…..well by now you’ve got the picture of my views, I imagine.

It ends – and it should too – with a Christmas song, “Santa Claus Is Coming To Town” is great, if you like that sort of thing (and Luke Morley is one of the most underrated guitarists there is). And, yes everyone leaves with a smile, and I hope they did enjoy it as much as it seemed they did.

Me? I will have one of the nights of the year when they play with Ugly Kid Joe next November, because then Thunder will truly excel.

And I am absolutely, definitely never going to one of these Christmas shows again. I’ve said it four times before, and I must mean it now. I do….until the next time. Because Thunder are just absolutely wonderful – they are even better when they do their own songs, too.