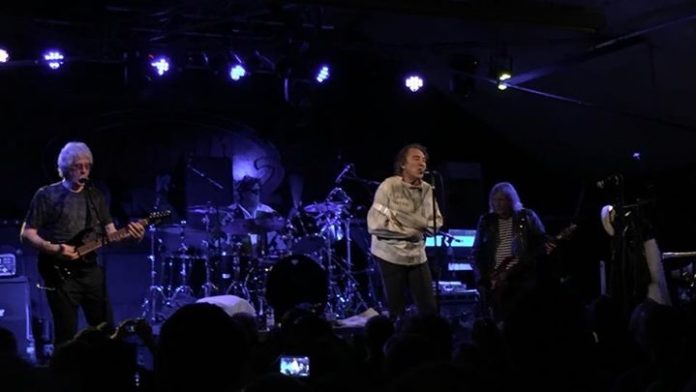 The Tubes make a quick – and brilliant return

It’s only been twelve months or so since this legendary band hit the UK and played this wonderful venue…..myself and many of the crowd who pretty much filled the Bilston Robin last night certainly didn’t expect to see The Tubes back over here so soon…..and with a whole new show too.
The 2016 tour was billed as the ‘Mondo Pulp’ tour and I was given an idea of what to expect when I interviewed frontman Fee Waybill the week before the show…..we were in for a treat….and that treat began with the band minus Fee Waybill at this point playing the musical piece ‘Overture’, Messrs Steen, Prince, Anderson & Medd make up one of the tightest bands you are ever likely to see on the live circuit and during a Tubes show they get plenty of opportunities to show off their musical prowess.
The main man Fee Waybill sauntered on stage resplendent in full 1930s gangster attire as the band burst into Chuck Berry’s ‘You never can tell’……this set the tone for a very entertaining evening ahead…..Berry’s song was followed by a cover of Major Lance’s ‘The Monkey Time’, this was certainly going to be an evening where you just never knew what you were going to get next…..but you knew you would enjoy it.
The band played a wonderful ‘James Brown Medley’ before hitting us with their own magnificent back catalogue such as ‘Mr Hate’, ‘Amnesia’, ‘Turn Me On’ & ‘Golden Boy’ which allowed guitar player Roger Steen to show us his full bag of tricks with some blistering guitar work on the track while Waybill shimmied around the stage dressed as Marlon Brando in ‘The Wild One’
With any Tubes gig you get a plethora of characters and costume changes which lends itself wonderfully to smaller venues, Waybill’s expressions are a big part of the show and would be wasted in bigger venues……and you can tell the band love the closeness of the crowd, no silly barriers here keeping the crowd at arms length and not one bit of pushing and shoving…..everyone was here to enjoy themselves and enjoy themselves they certainly did.
Other classics followed such as ‘What do you want from life’, ‘Mondo bondage’, ‘The man who shot Liberty valance’ and ‘The tubes world tour’ which segued perfectly into ‘White punks on dope’…….by this time Waybill had taken on the mantle of Quay Lewd complete with two foot high platform boots……he may not be as steady on those boots as he used to but make no mistake Waybill is still one of Rock’s truly great frontmen.
The encore opened with another costume change and the bands biggest US hit ‘She’s a beauty’ before a fabulous cover of The Beatles ‘Saw here standing there’…..the last song of the night was ‘Talk to ya later’ which the band certainly did as they came out for a bit of a ‘meet & greet’ session fifteen mins after the show…..it was a fantastic night of brilliant musicianship and pure theatre…..it summed up The Tubes perfectly…..and they don’t show any sign of letting up just yet as they are planning another tour for 2017.
I’d waited years to see The Tubes and now in the space of 16 months I’ve seen then live twice and welcomed Fee Waybill twice onto my radio shows…..long may this run continue and long may The Tubes continue……they really are one of the music worlds greatest ever acts.
Garry Foster
Unchained: Tuesday’s 10pm-Midnight
Prog Rock Files: Thursday’s 10pm-Midnight
101.8WCR FM and online at wcrfm.com