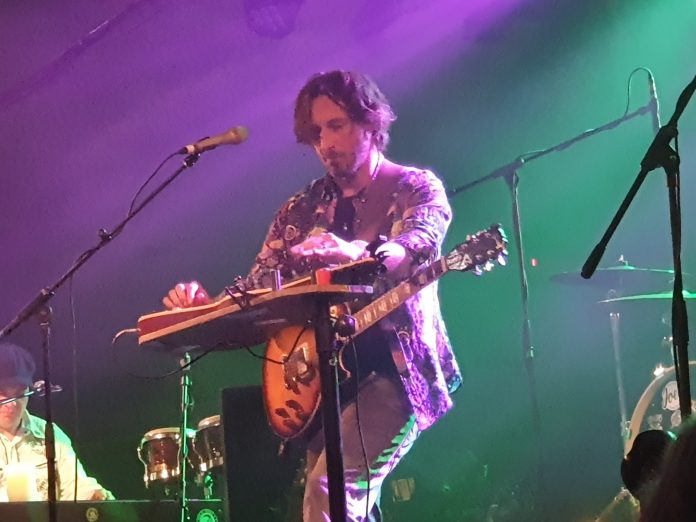 “It’s so great to be back in the Black Country…..you even have half decent pasties here…..” Wille Edwards smiles as he says it. It’s his usual icebreaker.

I’d seen him and the Bandits just under a year ago, but the last time I’d seen them in this room, they’d done a half hour support to Walter Trout, and talked about having a ceremonial pasty when they’d left Cornwall to drive up.

Pick either of those gigs, though and a hell of a lot has changed. First of all the “they” is totally new. Where there was once Wille and two bandits, as it were, they are now a four piece.

Drummer Finn McAuley is on his first tour, bassist Harry Mackaill did some shows last Autumn when opening for Kris Barras, but the most crucial – for me, because I love the organ sound – is WATB now have a proper keys man. Matthew Gallagher. The only non- West Country boy in the troupe, his presence has beefed things up incredibly.

And, without stating the bleeding obvious, it is like a different band. The joss sticks are lit before they arrive, the projection screen behind them shows some psychedelia all night, and they explore some different sides to these songs that you might not have thought of before.

Edwards is still front and centre. Still gifted on his guitar and one of the finest slide men you’ll see anywhere – and that’s just on opener “Bad News” – but what is interesting is how the fleshed out sound carries these songs.

Stuff from 2019’s “Paths”, almost required the bigger feel and “Find My Way” benefits, and goodness me, hearing them funk things up on “Keep It In The Down-Low” proves they have made the right choice.

It’s not even that radical a departure. Rather, if you were a fan before you still will be, but there is a definite feel that this could take WATB to another level.

Wednesday night crowds can be funny things, but there’s more in than there was this time last year up the road in Birmingham, and they are in good voice for the singalong of “Still Go Marching In”. “Mammon” takes things back to the roots of the band, with its rustic Cornish coastal feel, “Four Million Days” is just a superb song, but it is “Angel”, dedicated to Edwards’ late mother that feels like a centrepiece and the moment for the new band to fly, if you like.

A jam, but one of rare quality, there does seem to be some real chemistry here already.

Ending with a quartet that includes “Make Love”, the soul filled single, “Victim Of The Night” and “1970” (where I’ve always thought Edwards was wishing he could make music) shows the quality of those tunes, but it’s the other one of the four “Daylight” that resonates more clearly. Raw, heavier and with an almost Led Zep type feel, this is a rock n roll band now. When it wants to be, anyway.

“Jack The Lad” has a kind of coolness about it, but the last one “Virgin Eyes” almost ten years old, is dusted down and given a new lease of life here.

The same goes, actually, for Wille And The Bandits in general. They’ve always been magnificent. They still are, they are just pursuing a slightly different road right now.

On the evidence of this live show, then we can be looking forward to the upcoming studio work with great anticipation.